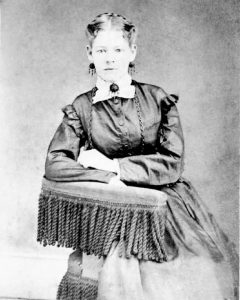 Tillie Pierce is one of the bravest civilians to spring into action after the Battle of Gettysburg broke out. Without questioning her own safety, she rose to the occasion to assist in tending to wounded soldiers who were hurt in battle. Learn about the haunted Tillie Pierce House Inn.

At only 15-years-old, Tillie showed more courage and selflessness than some men. She amputated injured arms and legs, sewed up bleeding gouges, and dressed wounds well into the night during the war.

Read on to learn what led Tillie to become an integral part of the American Civil War and why the inn named after her is considered to be so haunted.

Tillie’s Life Before the War

Born in 1848, Tillie Pierce would live and die in Pennsylvania. The daughter of a butcher, she was the youngest of four Pierce children, all of whom lived above their father’s butcher shop.

Many years later, Tillie would write a book about the events that unfolded once the war hit their streets. Entitled “At Gettysburg, or What A Girl Saw and Heard of the Battle: A True Narrative”, Tillie recounts the bloodshed she witnessed and the action she took to play a helpful role during a horrific time.

On many occasions, she and her family heard rumors that rebels were about to raid their homes. More often than not, this kind of talk was just that – rumors. But during late June of 1863, the town’s fears became a reality. Confederate forces reached the area, with Union troops doing all that they could to keep the Southerns at bay.

The War Was Nearing

The following is an excerpt from her book, which serves to give a sense of the scope of the American Civil War and the Battle of Gettysburg:

“They passed northwardly along Washington Street, turned toward the west on reaching Chambersburg Street, and passed out in the direction of the Theological Seminary.

“It was to me a novel and grand sight. I had never seen so many soldiers at one time. They were Union soldiers and that was enough for me, for I then knew we had protection, and I felt they were our dearest friends. I afterwards learned that these men were Buford’s cavalry, numbering about six thousand men.

“A crowd of ‘us girls’ were standing on the corner of Washington and High Streets as these soldiers passed by. Desiring to encourage them, who, as we were told, would before long be in battle, my sister started to sing the old war song ‘Our Union Forever’.”

To witness such a great force marching through one’s hometown streets would have caused many to run into hiding. Not Tillie, for she knew that her brothers were fighting Confederates just south of Pennsylvania and that she had a duty to perform. From here, Tillie’s parents would send her to their neighbor’s, the Weikert Farm, as it was considered a safer location.

Tillie and her friends, who were also sent to the Weikert Farm, were just finishing breakfast on July 1st when word came that Union troops were arriving in force. From her book, Tillie wrote:

“First came a long line of cavalry, then wagon after wagon passed by for quite awhile. Again we sang patriotic songs as they moved along. Some of these wagons were filled with stretchers and other articles; in others we noticed soldiers reclining, who were doubtless in some way disabled.

“It was between nine and ten o’clock when we first noticed firing in the direction of Seminary Ridge. At first the sound was faint, then it grew louder. Soon the booming of cannon was heard, then great clouds of smoke were seen rising beyond the ridge.

“The sound became louder and louder, and was now incessant. The troops passing us moved faster, the men had now become excited and urged on their horses. The battle was waging. This was my first terrible experience.

“I remember hearing some of the soldiers remarking that there was no telling how soon some of them would be brought back in those ambulances, or carried on the stretchers. I hardly knew what it meant, but I learned afterward, even before the day had passed. It was almost noon when the last of the train had passed and I began to think of dinner and the folks at home.”

After fighting broke out among the Union and Confederate forces, it wasn’t long before she found herself surrounded by wounded soldiers who were brought in from the streets. These men soon filled the house and barn. Without hesitation, Tillie grabbed a bucket, ran to the spring to fill it with water, and returned to clean as many wounds as she was able to.

More and more injured men began piling up, and all through the night Tillie dressed wounds and tried to comfort these poor souls. This account from her book gives a chilling insight as to what she was faced with:

“Some limping, some with their heads and arms in bandages, some crawling, others carried on stretchers or brought in ambulances. Suffering, cast down and dejected, it was a truly pitiable gathering. Before night the barn was filled with the shattered and dying heroes of this day’s struggle.

“Nothing before in my experience had ever paralleled the sight we then and there beheld. There were the groaning and crying, the struggling and dying, crowded side by side, while attendants sought to aid and relieve them as best they could….”

And Tillie did exactly that. Along with the attendants, she helped to medically care for every wounded soul who entered the homestead. By this time, the war was nearing its end and Tillie was soon allowed to return home with her family. She would later write of her walk back home; how with every step, she would further appreciate just how fortunate she was to have survived such a harrowing time.

Featured on television series that focus on the paranormal, the Tillie Pierce House Inn has gained quite the following due to its haunted nature. Ghost-hunters and those curious in the otherworldly will often frequent the inn with the hopes of encountering a poltergeist or two.

Considered the most haunted room in all of the inn, the “Blue Room” is said to be inhabited by soldiers who were once treated by Tillie. Their footsteps can be heard marching through the halls and in the attic above.

Patrolling troops have been witnessed by guests, with one such apparition that routinely wanders up and down the stairs. Guests have even been scared out of their wits upon entering their rooms and seeing a ghost sitting on the edge of their bed.

Ghostly children have been encountered playing within the bed and breakfast, only to vanish right before guests’ eyes. Strangely, there is even the poltergeist of a cat that has been seen scampering about. While there are many sightings of apparitions, never have any of them appeared to be malevolent in any manner; always helpful and friendly to all who visit the inn.

Tillie Pierce was a bastion of courage who selflessly fought to save the lives of soldiers who were complete strangers to her. It’s frightening to think how many troops would have died had Tillie not been there to aid them.

Tillie would go on to live to the age of 66, dying in Philadelphia, Pennsylvania in 1914. The heroics that she displayed on those fateful nights in July of 1863 are told in great detail in the book she wrote. She married in 1847, but outlived her husband by two years.

Today, the memory of Tillie’s valor is kept alive by the spirits who forever inhabit the Tillie Pierce House Inn.