Most Haunted Locations in Gettysburg

Gettysburg, Pennsylvania is a hot spot of paranormal activity. History records that 94,000 Union troops under General George Meade battled against 72,000 Confederate soldiers who served General Robert E. Lee. It was the bloodiest battle to take place during the Civil War. With more than 51,000 Americans either killed, wounded or missing in action, it’s no wonder that Gettysburg is rife with hauntings and stories of ghostly encounters.

Read on to get an inside look at some of the scariest places affected by or produced from the Battle of Gettysburg.

Now the National Homestead at Gettysburg, the facility was created in 1866 by Dr. John F. Bourns, and found great success initially. However, things went downhill after the headmistress was replaced by Rosa Carmichael, who had a cruel disposition toward the children there.

The orphanage has a rather dark and twisted history due to the fact that it was discovered that the owner was keeping children chained to the walls within the establishment’s cellar. Tours of the facility are even available, where it is claimed that lost spirits of the children can still be seen, some 150 years later.

Location alone allows this campus to be on our list. It is situated right next to Gettysburg Battlefield, where one of the most violent battles during the Civil War took place. Over 8,000 men died here, with casualties topping over 50,000.

Gettysburg College’s Penn Hall served as both a hospital and morgue during the war, and many sightings have been reported in this area alone. An administrator has claimed to have seen ghosts is action upon opening the doors to the Hall’s lower level where the make-shift hospital was once in use.

Stevens Hall, as well as Huber Hall, have both had occurrences that have scared the socks off of fellow classmates. Dead soldiers regularly walk around the campus, causing many potential students to look elsewhere for their academic needs.

Not your average Hotel, the Doubleday Inn of Gettysburg is near an area known as Iverson’s Pit, where a North Carolina brigade was once slaughtered. It was once a mass grave site for the fallen soldiers.

Many guests account to seeing strange, glowing orbs of light. Others have even been awakened by flashes of unexplained light. Perhaps these are the lingering spirits of General Alfred Iverson’s brigade, haunted by their commander’s lack of courage. The general sent his troops to their doom while he stayed behind.

Featured on the television series Ghost Lab, and Ghost Adventures, this entry has the distinction of being the residence of the only civilian death during the Battle of Gettysburg. She was killed by a stray bullet at the young age of 20 on July 3, 1863.

The Jennie Wade House serves as a tourist attraction, where visitors can pay to check out each of the house’s rooms. During the tour, guests are treated to actual video evidence of the home’s hauntings, as well as EVP recordings. 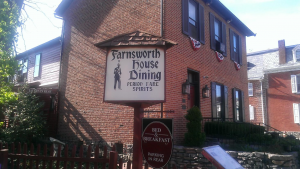 Said to have been built around 1810, the Farnsworth House Inn serves as both an inn and tourist shop. The land on which the building sits was initially owned by Reverend Alexander Dobbins until he sold it to John F. McFarlane. Mr. McFarlane then built the home and is its first recorded resident. He owned and lived in it until his death in 1851, at which point the Bank of Gettysburg took ownership. The house passed through several owners over the years until finally being purchased in 1972 by the Shultz Family, who maintain it to this day.

The Shultz’s claim that no less than 16 spirits occupy the residence, with each having its own name and personality. The spirits include an 8-year-old boy, several soldiers, and a former midwife. The fact that the residence was turned into a hospital during the Battle of Gettysburg only serves to validate their claims. Members of the Confederate Army died in the home, as well.

There have been many reports over the years of guests hearing the sound of heavy breathing, along with the strong scent of cigars. Patrons also claim to experience the sensation of being tucked into bed once in. There are several photographs that people have captured from the street of a spirit who inhabits a particular room known as the “Sara Black Room”. 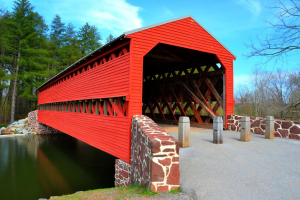 This 100-foot truss-covered bridge, known also as Sauches Covered Bridge during the Battle of Gettysburg, is a National Historic Place. The bridge was built back in 1854, and as such, was used by both the Union and Confederate Armies. Over the years, the bridge suffered damage from a flash flood, knocking it off one of its abutments. A total of $600,000 was used to restore the bridge to its current state, and it was rededicated in 1997.

A Bridge Too Far

Due to its heavy use during the Civil War, this bridge is said to be extremely haunted. It’s been said that three Confederate soldiers deserted their until, only to be captured and hanged from Sachs Bridge. Many photographs have captured apparitions on the bridge, along with odd mists and other strange anomalies. Sachs Covered Bridge was closed to vehicles in 1968, yet remains open to pedestrians.

Devil’s Den is a large formation of rocks and boulders covering the south end of Houck’s Ridge at the Gettysburg Battlefield. Sharpshooters used its coverage during the war, as well as other infantry. A bridge connects two of the larger boulders – known as Little Round Top and Big Round Top – and visitors will find memorials scattered about, along with walkways lining the historical site.

Visitors have long reported hearing gunshots and the sound of drum calls from the wars of yesteryear. Others have said that their cameras often refuse to work, and have even had belongings fly right out of their hands. Amazingly, guests have claimed to have spoken with the spirit of a dead soldier, and yet, when they attempt to take a photograph, he disappears right before their eyes.

Robert E. Lee himself reportedly stopped at the Daniel Lady Farm on the first day of the Battle of Gettysburg. The home was used as a headquarters for Confederate General Richard Ewell. The farm’s barn was used as a field hospital to treat wounded from both sides. The Gettysburg Battlefield Preservation Association acquired the farm in 1999 for $400,000.

Forensics have tested and verified bloodstains within the barn, allowing for the exact location of where care took place within its walls during the war. With many soldiers passing through here to receive care – and many dying – it’s no wonder this location is reported as being haunted. Some say the ghosts of lost soldiers roam about here, along with General Ewell. 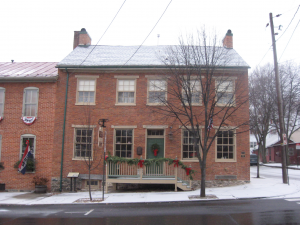 One of Gettysburg’s most haunted inns, the Tillie Pierce House is named after a teenager at the time who was pressed into service during the Civil War to assist in nursing injured soldiers. She helped with everything from amputations to dressing wounds.

There is a location within the Tillie Pierce Inn known as the “Blue Room”, which is said to be the most paranormal of all rooms, while the sound of footsteps abound in the attic above. The ghost of a patrolling soldier is often seen going up and down the stairs, and guests have even witnessed a ghost sitting on one of beds. Multiple spirits of children, and even a cat, have been seen.

While it sounds like there are multiple entities inhabiting this residence, none of them are said to evil.

1. Cashtown Inn, one of the last Haunted locations in Gettysburg: 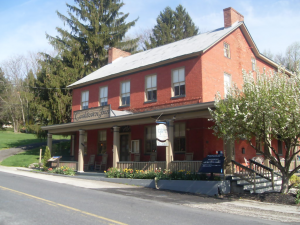 Built in 1797, this entry got its name from its innkeeper, Peter Marck, who only accepted cash from his customers. Like others listed in this series, the Cashtown Inn also became a headquarters for Confederate officers during the Battle of Gettysburg. Its basement served as a hospital, with so many amputations reportedly performed, that the severed limbs piled so high that they blocked any sunlight from entering through the cellar window.

With the aforementioned gore taking place here, it’s easy to see why this makes the list. The current owner has a collection of photographs showing strange orbs of light, and even skeletal figures appearing. Guests of the inn have complained of loud banging on their doors, lights shutting off without explanation, and even doors locking on their own.

Perhaps the most bizarre accounts have been from guests who have returned to their rooms to find that their luggage has been packed all on their own.

Check out some of our other ghost tours and hair raising websites, like MiamiHaunts not to mention our interactive fully immersive tour app.

For more check out our Civil War Ghosts tours.