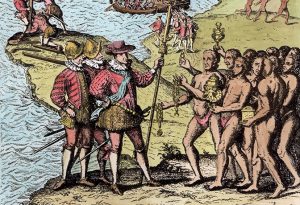 The European’s arrival in the New World was nothing short of an Apocalyptic event for most natives. In the Americas, the coming of Europeans led to plagues, war, genocide, and subjection. It led to the destruction of empires, ways of life, and cultural traditions.

In 1517 the Spanish conquistadors, led by Hernán Cortés, arrived in Tenochtitlan, the capital of the Aztec Empire. This act alone started the new continent down a slippery slope of perdition. Already, numerous health issues had been assailing – for almost 1000 years – the various tribes in this uncharted land; indigenous people, studies have shown, were in a downward spiral healthwise.

Off the ships, the Conquistadors came, clad in metal armor and iron, atop warhorses, and with futuristic weapons that put the bow and arrow to shame. They swept down the coats of Mexico, while their British and French counterparts swamped North America. Their greatest weapon was not their innate ability to conquer, enslave, persecute, and destroy… Their greatest weapon was the fact that they were unwittingly carrying with them a virological bomb. For years, smallpox, the plague, and dozens fo other illnesses had been commonplace in Europe. Cities turn asunder by these maladies, few survivors developing antibodies. Evolution and natural selection would, in turn, pass these new genetic traits – this immunity – down generations. Interbreeding as a way of unknowingly inoculating complete lineages. By the time Cortes and his army sailed to Mexico, with the intent of destroying the Aztec Empire, over 80% of his battalion had the proper antibodies against most European diseases. Yes, they could still get the plague, smallpox, influenza but it wasn’t as deadly. The Aztecs, and most indigenous people in the Americas, had never once been afflicted by any of these pathogens.

In less than 5 years, most great Empires and tribal communities in the new continent were annihilated. The reasons for this speedy and climactic elimination of such omnipotent Empires were multi-factorial. Superior weaponry, sophisticated military tactics, infighting among Empires, ritualistic sacrifice, the inability to coordinate and cooperate by the Incas, Mayans, Aztecs, and other principalities… But above all, the spread of European diseases… particularly smallpox.

When Cortes and his troops began their operations against the Aztecs in 1519, over 30 million people lived in Mexico. One hundred years later, after a string of smallpox pandemics decimated the residents, only around 1.5-3 million natives had survived.

Smallpox is a horrific and extremely contagious disease. Symptoms initially include high fevers, vomiting, headache, and severe abdominal and back pain. After a couple of days, these symptoms subside, and that’s when the horror show begins. A rash begins to appear and flower over the body. It spreads rapidly from the face and hands until it has consumed most of the body. Inside two days of its appearance, the blemish transforms into abscesses; fluid and pus. These sores then burst open and scab over. The scabs ultimately falling off, leaving deep nasty scars. This whole, frightful method, takes a month or so, and the infected person is infectious until all the scabs have turned into scars. The disease has a mortality rate of 30-35%. It is riddled with complications including scarring, blindness, and limb deformities.

The Taino concentrated on the shores of San Salvador Island. Their, 3 Spanish ships swayed on the horizon. A small party of foreign sailors came ashore, aliens to them. On 12 October 1492, the Taino laid down their weapons freely and brought these argonauts – Christopher Columbus and his crewmen – signs of friendship; gifts to share amongst themselves, and brake bread.

Remained so much our friends that it was a marvel.

The Taino numbered at least 60,000 and perhaps as many as 8 million. Less than 50 years later, by 1548, the population had plummeted to less than 500. Inhabitants fell victim to terrible plagues of smallpox, influenza, and other viruses. What little genetic line still exist of the Taino, is due to interbreeding between the Conquistadors and their women… the children of these unions obtaining cherished antibodies.

Indigenous people of the New World dying of smallpox became a common consequence of contact; widespread plagues and infections decimated whole villages in less than a week.

In April 1520, Spanish troops docked in what is now Veracruz, Mexico. Their ships disgorged hundreds of men willing to fight for their God and an army of unwittingly African slaves; most infected with smallpox. Two months later, the battalions infiltrated the capital of the Aztec Empire, Tenochtitlán. By mid-October, in the midst of an invasion, the virus was sweeping through the city. Almost 300,000 people were being overtaken by smallpox. The dead included the Aztec ruler, Cuitláhuac, and many of his senior advisers. By the time Hernán Cortes and his companies started their final advance on Tenochtitlán, corpses lay scattered all over the city… they meet little opposition.

Soon to be the United States.

Not all indigenous societies experienced such a wicked fate. Smallpox flowed more efficiently in densely populated tributaries and towns than it did in sparsely occupied regions. The Great Plains of the United States fared better against the onslaught. There, nomadic hunter-gatherers mirrored the great bison herds, and epidemics were mostly contained in single bands. Bands and tribes suffered heavy losses, but their social distancing from other neighboring towns prevented the spread of the disease.

Out of our regard to them we gave them two Blankets and an Handkerchief out of the Small Pox Hospital. I hope it will have the desired effect.

When we think smallpox, we generally envision blankets being passed out to inconvenient natives… tribes and indigenous people that did not mesh with the designs of Manifest Destiny. Blankets a synonym of greed, ambition, genocide, war crimes, and basically the worst humanity has to offer.

But, the reality is far more sinister. The US government retro engineered the whole Blanket Debacle and it learned the science of BIO WARFARE through the British.

The Siege of Fort Pitt.

Now one of the most haunted places in the city of Pittsburgh, Pennsylvania, the story behind Fort Pitt is the sort of tale the Brits’ rapidly try to sweep under the rug whenever they get into a hissy fit in the UN and Human Rights; along with most of their dealings in Indonesia and India.

The Siege of Fort Pitt occurred during June and July 1763. The siege was a part of Pontiac’s War: an attempt by Native Americans to boot the nasty the British from their region after the redcoats declined to honor their agreements and treaties. The British had promised that they would leave the land willingly after the defeat of the French.

This episode is best remembered as an early example of biological warfare. While the natives dealt with diplomacy, the British – after having not only used their land but their own people as soldiers against the French – played underhandedly. In an effort to sway the Natives and “prove” their willingness to live harmoniously in the land, the redcoats handed out gifts to Native American emissaries. Beats, bubbles, food items, and dozens of blankets plucked straight from the smallpox infirmary.

To Sundries got to Replace in kind those which were taken from people in the Hospital to Convey the Smallpox to the Indians Vizt:

The plan ultimately backfired and not many Natives, the British later observed, actually contracted smallpox. Still, this was the seed that would later inspire the atrocities in various reservations and tribal upheaval.