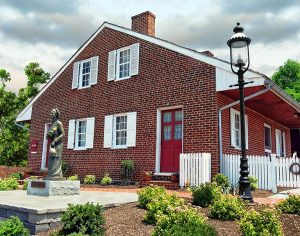 Tragic story, Jennie’s. As the only direct civilian casualty during the Battle of Gettysburg, her death was a stark reminder for everyone who survived the war as to just how fortunate they were. Killed at the young age of 20, Jennie Wade lost her life after being hit by a stray bullet.

The Jennie Wade House is largely considered to be haunted and still stands today, with much of its original construction intact. It’s now a popular museum that serves to draw tourists from all over by offering tours that provide accounts of the activity within.

Taking place at the time of Jennie’s death was the infamous Battle of Gettysburg, a part of the American Civil War that resulted in anywhere from 46,000 to 51,000 lives lost. This alone accounts for many of the hauntings you hear about in Gettysburg today.

With such haunted happenings, there’s usually some kind of lost love attached to its backstory. With Jennie Wade’s, you find just that. But first, let’s go back a bit further to set the stage for what became one of Gettysburg’s most haunted attractions.

Jennie Wade was born in Gettysburg, Pennsylvania, where she lived at home with her mother, Mary, three brothers, and two sisters. Jennie’s father, James, wasn’t in the picture very often; a tailor by trade, James frequently had battles with the law, to the point that he was admitted into a mental institution over his erratic and troubling behavior.

To make ends meet without Mr. Wade, Jennie and her mother worked out of their home as seamstresses, tailoring clothes for the local community. To further assist in providing income, the Wades cared for a local family’s young disabled son named Isaac.

When the Battle of Gettysburg began on July 1st of 1863, Mary Wade didn’t feel like they were very safe, as war was waging just outside of their house. So, Mary packed up her family and Isaac and took them to the home of the eldest Wade sister, Georgia Anna. Thinking it would be the safer of the two homes, Jennie and her mother helped look after Georgia and her 5-day-old-son while there.

Later that afternoon, the Wades found themselves right in the middle of gunfire. In an unfortunate turn of events, the battle had now transitioned with them to right outside Georgia’s home. Staying calm, Jennie brought food and water to Union soldiers, all while helping to care for her older sister and baby nephew through the remainder of the evening. It was later learned that over 150 bullets hit the Wade home.

Artillery continued to rattle the duplex home going into the next day. That morning, during a break in the crossfire, Jennie and her brother went outside to collect firewood. She returned inside to read the Book of Psalms for a bit.

After studying Scripture, Jennie headed to the kitchen to begin kneading dough so that she could provide the troops with bread. Just then, a bullet crashed through a bedroom window, lodging itself in a bedpost mere inches away from Georgia and her baby boy.

Suddenly, and without warning, as Jennie was finishing up her dough, another bullet flew into the home, penetrated two doors and hit Jennie in the back and through her heart, killing her instantly.

Upon seeing what had happened, Georgia let out a scream that alerted Union soldiers outside. Running into the home, soldiers quickly escorted the remaining family members out the back, where they would be safe from Confederate gunfire.

After the South had retreated on July 4th, it was reported that Mary Wade finished Jennie’s bread, making 15 loaves out of the very dough that her daughter had kneaded the morning she was killed. Soldiers then temporarily buried Jennie’s body in the backyard using a coffin that was intended for Confederate General, William Barksdale.

Several months later, in January of 1864, Jennie’s body was relocated to the German Reformed Church’s cemetery. Almost two years after that, in November of 1865, she was moved yet again to the Evergreen Cemetery where she remains at rest.

A monument was erected over her Evergreen grave in 1900 along with an American flag that flies day and night. The only other woman with that honor is the late Betsy Ross.

Nearly 20 years after the death of her daughter, the United States Senate awarded Mary Wade with a pension. This was because it was deemed that Jennie had been killed while serving the Union – baking bread for their soldiers. A bittersweet victory for the Wade family, but a kind – if late – gesture from the Senate.

Be Still My Beating Heart

When the American Civil War began in 1861, Jennie was engaged to a Union corporal by the name of Johnson “Jack” Skelly. Without Jennie’s knowledge, Jack had been seriously wounded just two weeks prior to her death.

With news traveling much slower in those days, Jennie never even knew of her fiance’s injury. A few days after her death, Jack died from his injuries, passing away on the 12th of July. He, too, never received the news of what had happened to his beloved Jennie.

There persists rumors that if you place your finger in the hole of one of the doors that was penetrated when Jennie died, you will become engaged not long after. Miraculously, that door is still in the home to this day – hole and all.

Hauntings of the Wade House

The Jennie Wade House is today the Jennie Wade Museum. Inside, they offer a very detailed and graphic tour that is available to the public who wish to get an inside look at 19th century life – specifically, when Jennie Wade died during the Battle of Gettysburg.

Here, you’ll find that the same floors are still intact – and still covered in blood from when Jennie fell to the floor after being shot. Also on display are several photographs that have been taken from inside the home. Some of them feature objects that will make you question reality, seemingly capturing the spirit of Jennie Wade.

Perhaps the most interesting part of the tour is when actual video evidence is given, proving the existence of a supernatural entity at work in the Wade home. If that wasn’t compelling enough, EVP (Electronic Voice Phenomenon) recordings are played, providing even more proof of the hauntings that take place within.

Many witnesses have claimed over the years that they have seen her walking through the Wade home, while others have spotted her wandering the surrounding countryside. It would appear that Jennie can’t let go of her once beloved homeland.

So often do reports come forward that the television series Ghost Adventures, and Ghost Lab have both featured the Wade residence on their respective shows.

The Battle of Gettysburg was a horrific part of the American Civil War that resulted in the deaths of tens of thousands of Americans. Astonishingly, Jennie Wade remains the only civilian to die during the fighting that took place in Gettysburg, Pennsylvania.

With so much bloodshed throughout Pennsylvania during that era, many buildings and locations are believed to be haunted. You needn’t travel very far to find any such place, as they are littered all over the area.

If you decide to visit the Jennie Wade House, make sure that you bring a camera. You never know what might later show up in your photographs. Many who have done so have come to find inexplicable paranormal objects, possibly the disembodied spirit of Jennie Wade.

The Jennie Wade House will forever hold the memory of the tragedy that took place there on that fateful July morning in 1863. As long as it is still standing, future generations can come to learn of the bravery that Jennie Wade so selflessly displayed that day.