The Ghosts of the Gettysburg National Cemetery 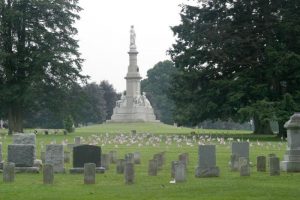 The cemetery holds 3,512 burials from the Civil War, including the tombs of 979 unknowns. It also has segments for vets of the Spanish–American War (1898), World War I (1917–1918), and other conflicts, along with graves of the veterans’ wives and children. The total number of over 6,000 interments.

It’s riddled with Battlefield headstones, monuments, and markers. Giant statues and memorials that scattered throughout the cemetery, its stone walls, iron fences, and gates. It’s part of the Gettysburg Historical District and it is without a doubt one of the most awe-inspiring sights in the United States. A place steeped in bloody history and heroic struggles.

The Battle Of Gettysburg

The Battle of Gettysburg was fought July 1–3, 1863, in and around the borough of Gettysburg, Pennsylvania. On one side of the soon to be a carnage-filled arena, the Union forces. On the other side, waiting to get their licks in: Confederates. Brother against brother. American against American. A deadly war coming to sanguine fruition. A war that ripped a nation in half.

The battle was renowned on account of its casualties. It was a bloodbath that involved the largest number of losses of the entire war. It was a spectacle swamped in the inhumanities of man, the slaughter of its better angels, and a major turning point in the war.

After his victory at Chancellorsville in Virginia in May 1863, Lee drove his troops into the Shenandoah Valley to launch his second incursion of the North…the Gettysburg Campaign. His army’s spirit was at an all-time high, their souls tempered by triumph. Lee intended to change the focus of the campaign from war-stricken Virginia and wished to sway Northern politicians to give up their pursuit of the war by penetrating as far as Harrisburg, Pennsylvania, or even Philadelphia. He wanted the policymakers to feel his breath on their necks and start doubting their Northern resolve.

Meanwhile, President Lincoln knew that in a way this was his last stand, the Confederates were edging their speartip ready to strike. Lincoln prodded his troops and send his commanders out into the pitch of battle. Maj. Gen. Joseph Hooker marched his army in pursuit but was soon dismissed of command just three days before the action and replaced by Meade.

The two armies crashed into each other at Gettysburg on July 1, 1863; Lee frantically gathered his forces there, his objective being to engage the Union army and defeat it. It was a gigantic catastrophe… both armies were fighting to end the war and both were willing to break their honor, their own gentleman rules, and succumb to their worse instincts. When the bullets were all fired, the men grabbed their rifles and bayonets; when those were broken and frayed, they went into a blind rage and resorted to fist and claws. Bodies were rendered to pieces, skulls caved in by rifle butts, throats gauged out by hungry teeth.

On the next day of battle, most of both armies had finally assembled. Last night’s impromptu attack nothing more than a prelude of things to come.

In the late afternoon of July 2, Lee lanced a heavy assault on the Union left flank, and fierce combat raged at Little Round Top, the Wheatfield, Devil’s Den, and the Peach Orchard. On the Union right, Confederate marches intensified into full-scale advances on Culp’s Hill and Cemetery Hill. All over the battleground, despite notable disasters, the Union champions held their lines.

On the third day of battle, combat continued on Culp’s Hill, and cavalry skirmishes erupted to the east and south. Still, the central piece of this drama was a climactic infantry assault by 12,500 Confederates against the center of the Union line on Cemetery Ridge, known as Pickett’s Charge. The onslaught was repelled by Union rifle and cannon fire; the Confederate army suffered its greatest defeat.

Lee, understanding that he had lost the battle, led his infantry on a torturous withdrawal back to Virginia.

Between 46,000 and 51,000 soldiers from both armies were killed in the three-day battle, the most costly in US history.

The Address to end all Addresses

Four score and seven years ago our fathers brought forth on this continent, a new nation, conceived in Liberty, and dedicated to the proposition that all men are created equal.

Now we are engaged in a great civil war, testing whether that nation or any nation so conceived and so dedicated, can long endure. We are met on a great battle-field of that war. We have come to dedicate a portion of that field, as a final resting place for those who here gave their lives that that nation might live. It is altogether fitting and proper that we should do this.

But, in a larger sense, we can not dedicate—we can not consecrate—we can not hallow—this ground. The brave men, living and dead, who struggled here, have consecrated it, far above our poor power to add or detract. The world will little note, nor long remember what we say here, but it can never forget what they did here. It is for us the living, rather, to be dedicated here to the unfinished work which they who fought here have thus far so nobly advanced. It is rather for us to be here dedicated to the great task remaining before us—that from these honored dead we take increased devotion to that cause for which they gave the last full measure of devotion—that we here highly resolve that these dead shall not have died in vain—that this nation, under God, shall have a new birth of freedom—and that government of the people, by the people, for the people, shall not perish from the earth.

This is the place that was consecrated by Lincoln’s backhand slap to every would-be speech-writer. Lincoln’s legend was solidified by those words.

During the trip, Lincoln remarked to hsi aids that he felt weak. His aid noting that Lincoln’s face had “a ghastly color” and that he was “sad, mournful, almost haggard.” After the speech, Lincoln was diagnosed with smallpox.

With Smallpox and partly hallucinating, Lincoln managed to upstage the orator of that day with one of the best speeches in history; 271 words, beginning iconic words that melodically rounded out the American spirit and its perseverance.

The cemetery, as well as most of Gettysburg, is infested by ghosts. The Battle of Gettysburg was one of the most gruesome displays of violence during the Civil War. The area is marked by graves, monuments, inns, pubs, and mass graves that have yet to be uncovered.

You cannot walk out on to the Gettysburg area without a Ghost Tour or haunted tale rearing its ectoplasmic head into your private space.

Many guests touring the cemetery report observing balls of unexplainable light, Marfa Lights, roaming freely across the kept lawn. They have also borne witness to strange ethereal apparitions marching up and down the hills and the pristine landscape. At night, in the distance, the wind oftentimes carries the sound of gunfire, the boom of cannons, the shriek of the damned.

Click To Join Our Haunted Monthly Newsletter! Stay updated on stories of hauntings and intrigue!