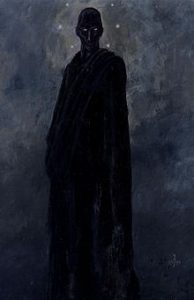 The Bridgewater Triangle is a curious spot in southeastern Massachusetts that’s known for all manner of wacky supernatural hijinks. You name it, they have it. Pretty certain that if you look hard enough, you’ll stumble on a portal to Hogwarts; maybe under a rock, next to a UFO landing strip, across from a Bigfoot camping ground. The area compromising the Bridgewater Triangle is about 200 square miles – 520 square kilometers for everyone else in the world. It is a smorgasbord of alleged paranormal phenomena, ranging from ghosts, poltergeist, demons, and specters, to UFOs, ball of fire, St. Elmos’ fire, Marfa lights, and various monsters sightings. The site seems to be the equivalent of a fashion model runway for every cryptozoological critter ever recorded: elf, redcaps, sprites, Bigfoots, giant snakes, Thunderbirds, Wendigos, etc.

Google doesn’t exactly have the area cordoned off. You can’t simply ask Siri or Alexa:

“Where can I see a UFO in Massachusetts?… Oh, and add milk to my shopping list.”

The specific borders of the Bridgewater Triangle were first drawn up by renowned cryptozoologist Loren Coleman. The term was coined in the 1970s by the man himself and then made popular in his book Mysterious America; a sort of guide/road map/ travel diary of all the weird things Americana has to offer.

Coleman jotted down that the Bridgewater Triangle encompasses the towns of Abington, Rehoboth, and Freetown at the points of the triangle. Everything inside the triangle, every town, hamlet, city, outhouse, and dog-house was fair game for the forces of the Never-Never and might as well invest in holy water and some magic crystals for protection. The towns of Brockton, Whitman, West Bridgewater, East Bridgewater, Bridgewater, Middleboro, Dighton, Berkley, Raynham, Norton, Easton, Lakeville, Seekonk, and Taunton have agent Mulder and Skully on speed dial. In the 1980s, paranormal investigators broadened the triangle and included an area in neighboring Vermont called the Bennington Triangle.

Points of Interest In the Bridgewater Triangle

OK, so now you know that smack dap in the middle of Massachusetts there’s a chance to have a one on one conversation with one of Lovecraft’s creation. Maybe trade baking tips with Nyarlathotep. For those who find the prospect of staring into the maw’s of terror and mind-shattering horror as an awesome way to spend the weekend, then a roadmap to the Stars is a must. For the rest, “let’s order out some Chinese and binge Stranger Things instead”, good for you; we’re going to need that clarity of mind the next election cycle – whichever we’re in.

Profile Rock: this is, according to legend, the site where Wampanoag historical figure Anawan received the lost wampum belt from Philip; the first peace treaty made between the Native people of America. Belts of these types were powerful spiritual charms.

“Philip’s belt, curiously woven of wampum nine inches broad in black and white figures and flowers, and many pictures of birds and bears. This when hung upon Captain Church’s shoulders it reached to his ankles. And another belt of wampum he presented to him wrought after the former manner, which Philip was wont to put upon his head. It had two flags on the back part which hung down his back, and another small belt with a star upon the end of it, while he used to hang upon his breast.”

On certain days, right before sunset, the ghost of a man can be seen with his legs crossed and outstretched arms blessing the State Forest.

Hockomock Swamp: one of the most haunted central sites to the legend of the Triangle. In Algonquian, it means “the place where the spirits dwell.”

Solitude Stone: yet another weird, enigmatic inscribed stone. It’s located near Forest Street on West Bridgewater. The stone was found next to a missing person’s body; an apparent suicide. The rock is also known as “suicide stone.” Carved unto its surface:

“All ye, who in future days, Walk by Nunckatessett stream Love not him who hummed his lay Cheerful to the parting beam, But the beauty that he wooed.”

Spooks, goblins, and things that go bump in the night

What will you see in Bridgewater Triangle? What sort of spooky, bizarre, soul churning monsters will zoom out of the shadows and give you a heart attack?

Well, just about everything. The area is swamped – get it? – with a mix of strange paranormal reports. UFOs? So many that they might as well have an FAA supervised landing chart. Mysterious unknown animals? Hunting trips in the area are a Pandora’s Box of possibilities, “we’ll fry it… just don’t look at its 3rd eye.” Ghosts and poltergeist? On a schedule with paid weekly performances. Hominids? You’ll need a chart to differentiate between a Sasquatch, a Yeti, a Skunk Ape, and Big Foot. Anima mutilations? Satanist flock to the place like it’s the Meca.

Norton Police Sergeant Thomas Downy claims – and even filed a report – on the fact that he had witnessed a thunderbird. The mythical Thunderbird – a giant pterodactyl-like flying monstrosity with 12-foot wingspans are constantly being spotted in the area near Hockomock Swamp and neighboring Taunton.

Ghost and poltergeists are said to haunt most of the area. Most are said to be Native Americans trapped in an endless loop violence reliving those first hostile encounters with Invading European forces.

Freetown and Fall River is a particularly nasty hotspot. The area shrouded in staggering accounts and numbers of animal mutilations. Police are constantly being called to investigate a cult’s handiwork. Two specific incidents, both in 1998, still haunt the community. One in which a cow was found butchered in the woods. The other in which a group of calves and goats were mutilated, grotesquely, in a clearing. Both were part of a ritual sacrifice.

Another factor that contributes to the madness that is The Bridgewater Triangle is the fact that local criminals, mob outfits, have laid a claim to the area. They use its remote location and bizarre negative energy output to hide their dirty dark deeds. Dozens of bodies have been found, their skulls shattered execution still, within the Triangle.

According to legend, the reason why the Bridgewater Triangle is such a hot-zone of paranormal activities is because the Native Americans cursed the swamp centuries ago. The Natives put a malady on the area on account of the poor treatment they received from Colonial settlers. The tales say that it owes its paranormal unrest because the Natives summoned up dark spirits to damn the land and have their revenge on their European meddlers.

For more tales of the macabre check out our blog.