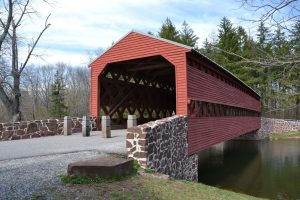 As are most things associated with the American Civil War, the haunted Sachs Covered Bridge is yet another on the long list of haunted structures found in Pennsylvania. Used by both Confederate and Union forces during the Battle of Gettysburg, the Sachs bridge served as the execution site for at least three Southern soldiers, providing the backdrop for the otherworldly activity said to take place there.

Built in 1852 by David S. Stoner, the Sachs Covered Bridge extends 100 feet and serves to connect land separated by Gettysburg’s Marsh Creek. For more than a century it allowed vehicles and pedestrians access in their travels.

However, due to weakening abutments over the decades, this beautiful historic landmark was closed to all automobiles by 1968. Almost 30 years later, flooding caused the bridge to be shaken from its foundation, requiring over half a million dollars to fully restore it with steel support beams.

While certainly more structurally sound than ever, it is today open only to foot traffic. Throughout the years, township officials considered reopening the bridge for vehicular use. But each time, the bridge’s preservation outweighed any change in operation.

Hung Out to Dry

When the Battle of Gettysburg broke out in July of 1863, the town of Gettysburg was turned upside down by the brutality that permeated the land. Since a vast majority of Union and Confederate soldiers were young men, there were instances that saw some of them attempt to abandon their posts and go into hiding.

One such occasion involved three Confederate troops who tried to evade the war by donning Union attire. Marching with the North near Sachs Covered Bridge, they were soon discovered as belonging to the South and were promptly made an example.

It’s argued as to whether they were spies, deserters, or outright traitors. Regardless, the three young men were hanged from the bridge’s wooden support beams, ensuring that any Confederates passing through would see the executed men, thereby serving as a warning.

Sadly, this is only the tip of the proverbial iceberg when it comes to the harrowing accounts that took place during the infamous Battle of Gettysburg. As a part of the American Civil War, it saw tens of thousands of lives lost in the line of duty.

Largely considered to be the bloodiest of any infighting to ever take place on American soil, much of Gettysburg became inundated with all things war. Homes, businesses, and even schools were taken over by military forces to function as make-shift hospitals and command headquarters. Civilians sprang into action to assist in tending to the wounded as bullets sprayed from every direction.

It was a trying time, to say the least. The body count soon started rising to what seemed like innumerable heights; the make-shift centers were overcrowded with both the dead and the injured. It is because of this that Pennsylvania is known as one of the most haunted places in the country.

The End of Bloodshed

Fortunately for the overall outcome of the American Civil War, the Battle of Gettysburg served as the ultimate turning point. Due to a series of events leading up to Gettysburg, Confederate Colonel Robert E. Lee soon found himself with a greatly decreased army.

He waited for a Union counterattack, supposedly coming his way on the 4th of July. But the attack never came. Outnumbered and outgunned, Lee withdrew what few soldiers he had left and admitted defeat to Union General George Meade.

The Union was victorious in the Battle of Gettysburg and the war was nearly over.

Many people would later criticize Meade for sparing the lives of Lee and his remaining troops, as he had decided not to pursue any further fighting. Meade’s experience would prove that doing so would have had little effect, if any. The Confederacy was already defeated and any additional killing would have been grossly unnecessary.

At this juncture in the war, both Union and Confederate forces had already lost nearly 50,000 lives, and General Meade had seen enough death. The North would go on to rejoice in their bittersweet victory, while the South would mourn; their hopes of foreign recognition were forever gone.

Crushed by his defeat, Colonel Lee would try resigning from command, but Confederate President Jefferson Davis would not allow it, as he had confidence in the Colonel. And the President was correct is his assumptions; Colonel Lee would go on to claim victories in many other battles.

With the Union victorious, President Abraham Lincoln would go on to deliver one of our nation’s greatest speeches with the iconic Gettysburg Address. Here, he would redirect the trajectory of the Union’s vision, now aimed at finding liberty and equality among the people.

The final words of his grand speech eerily foreshadow the hauntings that would later pervade Gettysburg. On November 19, 1863, Lincoln would end his address by saying:

“The brave men, living and dead, who struggled here, have consecrated it, far above our poor power to add or detract. The world will little note, nor long remember what we say here, but it can never forget what they did here. It is for us the living, rather, to be dedicated here to the unfinished work which they who fought here have thus far so nobly advanced.

“It is rather for us to be here dedicated to the great task remaining before us – that from these honored dead we take increased devotion to that cause for which they gave the last full measure of devotion – that we here highly resolve that these dead shall not have died in vain.

“That this nation, under God, shall have a new birth of freedom – and that government of the people, by the people, for the people, shall not perish from the earth.”

Such noble yet chilling words spoken by our former President. It would appear that the dead took this well to heart, for it seems that they will forever inhabit the lands of Gettysburg, Pennsylvania.

The Beginning of Hauntings at Sachs Covered Bridge

So often do ghostly activities occur here that it has garnered the attention of many popular paranormal investigators and television series.

While many of the haunted locations throughout Gettysburg get plenty of attention, the Sachs Covered Bridge has become an icon and hot spot for otherworldly sightings and paranormal encounters. Its captivating beauty further draws outsiders to experience its mysterious charm.

In the daylight, the bridge is truly a picturesque scene, with stunning streams of water and elegant wooden construction. Once under the cover of night, however, the atmosphere quickly changes to a rather frightening setting.

Many witnesses have come forward to report the sighting of three disembodied heads floating on the bridge. Under the dim moonlight, their pictures have captured what appears to be the ghostly apparitions of the three Confederate soldiers.

The strong scent of cigar smoke has also been detected by guests, as if a soldier or general from years ago still patrols the area. Visitors have also been rattled by a tap on their shoulder, only to find that no one is there with them.

The sound of distant gunfire is heard when on the bridge at night. This could easily be attributed to someone hunting in the nearby woods, but those same gunshots are often accompanied by cannon fire.

Throughout Gettysburg, tourists and lovers of the paranormal will find many locations to satiate their curiosities. But none are quite as astonishing as the Sachs Covered Bridge; its beauty is only matched by its horror.

Preserved for nearly 200 years, this haunted crossing stands as a historical reminder of life during the late 19th century and the many brave soldiers who used it during the Battle of Gettysburg.