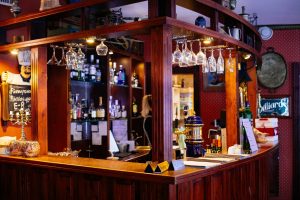 Everyone throughout history has loved to take the weight off their bones, kick their feet up, visit their local hole-in-the-wall bar or tavern, and have a couple of drinks to relax with friends. Sometimes the relaxing is so good; paranormal patrons stick around. Other times, tragic events keep spirits tied to the locations that they perished. In the list below, we’ll delve a bit deeper into a few of the most notably haunted bars and taverns in Pennsylvania state.

The Jean Bonnet Tavern, otherwise known as Old Forks Inn, is a historic Pennsylvania inn and restaurant about 50 miles outside of Downtown Pittsburgh. After Robert Callendar acquired this land in 1762, he erected the building shortly after. In 1779, it was purchased by Jean Bonnet and was opened as an inn used by protesting local farmers during the 1794 Whiskey Rebellion, which was a protest on the new tax on alcohol. It has been said that there is more to the Jean Bonnet Tavern than meets the eye. Sure, its historic charm captures visitors from the start, but it’s the Jean Bonnet’s spirits that keep some patrons coming back.

On the Jean Bonnet Tavern’s own website, we were able to uncover some pretty spooky happenings! One of the most dramatic of these sightings occurred years before the present owners took over. A female bartender was working while her male friend visited. The story says, “One night, the bartender was working when a friend of hers came in. Through the course of the evening, the fellow had too much to drink. When it came time to close, she and her male companion were afraid to let the inebriated fellow drive. As the guy lived nearby, they decided to lock up, take the man home, and then return to finish cleaning up. The woman had the keys and knew this would be fine with the owners. They took the man home and returned to the bar. As they walked along the porch, they glanced in the window of the bar. Sitting there was a solitaire man who was sipping a drink. That was impossible, for they had made sure the bar was empty before leaving. Still, the fellow had gotten in somehow. Quickly, they unlocked the door and hurried into the bar. No one was there, but the building is big, so did the man hear them coming and hide? The two immediately ruled out anyone hiding in the upper levels because they had the key that unlocked the iron grillwork that separated the bar from those floors.”

Guests have reported hauntings over the years as well. Patrons’ experience being touched while they sit at the bar, full-body apparitions of men in ‘frontier type’ clothing are often experienced. Could they be the spirits of the farmers from the Whiskey Rebellion era? Even Jean Bonnet’s new owners have already had experiences in the tavern. Doors open and close on their own; footsteps upstairs are commonplace. Those who see and hear these things in the tavern are usually more fascinated than frightened.

Schaumboch’s tavern is a small stucco and sandstone tavern and inn located in the Hawk Mountain of Berks County, Pennsylvania, constructed in 1793. Like the Jean Bonnet Tavern, Schaumboch’s is crawling with ghouls. Named one of the state’s most notorious haunted dwellings by The Morning Call, Schaumboch’s has a hair-raising history.

Generations upon generations of Berks County residents have passed along stories of gruesome murders and ghosts that roam Hawk Mountain. The mysteries prevail to this very day, mostly surrounding a man by the name of Matthias Schaumboch. He established the location as a tavern for peddlers in the 1800s. Legend has it that Matthias lured his guests and weary travelers to the tavern to their untimely and tragic demise. Reports exist of human remains being found in not one but three wells on the property. Rumors of missing travelers who were last seen at the tavern are plenty, and some told of how Matthias plied guests with food and drink until they fell asleep. Once in a deep slumber, Matthias would murder the travelers and sell their belongings. The dispose of their bodies, he would hack them apart limb-by-limb and throw their remains into the numerous water wells on the property.

The saddest tale of the tavern is before Schaumboch’s time. You must go back all the way back to 1756. Amid the French and Indian war, a group of Lenape Indians from the area are said to have emerged from the surrounding forests and massacred an entire colonial village, including all children. One of the orphaned survivors, Jacob Gerhart, was one of the builders of the tavern, which was once his own home, and it now overlooks the space where his entire family was massacred. Throughout history, mountains have been seen as mysterious and magical places. The area of the Blue Mountains that the tavern is built was once seen as sacred by the Lenape people, which would explain their attack on the intruders looking to live in and profit from the area.

Benz also reported other eerie phenomena like muffled cries of children and cupboards opening on their own. He and friends who visited also started to hear heavy footsteps and dragging on the second floor, reminiscent of a body being dragged.

Spooky, right? Check back for some more of Pennsylvania’s Paranormal Pubs!