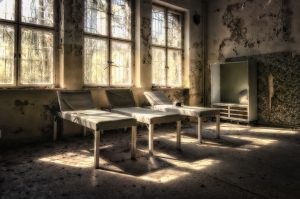 Like the Rolling Hills Asylum, Pennhurst State School and Hospital, originally known as the ‘Eastern Pennsylvania State Institution for the Feeble-Minded and Epileptic’ was a state-run institution for mentally and physically disabled individuals of Southeastern Pennsylvania. Located in Spring City, it remained open for 79 years filled with controversy. Finally, on December 9th, 1987, Pennhurst closed its doors for good. It stands now as a lone sentinel in memorial of the hardships and abuses endured on its expansive and gloomy campus.

Opening late autumn in 1908, Pennhurst was meant to be a refuge for mentally and physically disabled folks who ended up in state hospitals and even prisons, in desperate need of the special institutionalized care that Pennhurst would provide. Constructed with over 32 buildings and facilities, the asylum covered over 633 acres of Crab Hill in Spring City. Made of red brick, terra cotta, and granite trimmings, the asylum was built to last, and last it did, regardless of the inhumane conditions that the residents there were forced to endure. After admitting ‘patient #1’ on November 23rd, 1908, within four years of operation Pennhurst was already overcrowded and under pressure to admit immigrants and criminals. Residents were classed based on their mental and physical health, as well as dental health. They were then assigned a job on campus, all of which ranged from shoemaking to butchering. The residents here were pushed into a forced labor system which the Supreme Court would later label involuntary servile labor – akin to slavery. As soon as residents were admitted, they lost their fundamental human rights and freedoms, including the right to leave or exercise life’s most basic choices for themselves.

The times then were terrible for anyone who wasn’t a Caucasian male who owned property or held money. In 1913, the legislature at Pennhurst appointed a Commission for the Care of the Feeble-Minded which stated that disabled people were unfit for citizenship and posed a menace to the peace, thus recommending a program for custodial care such as the care intended at Pennhurst. Pennhurst’s Chief Physician quoted ‘Every feeble-minded person is a potential criminal. The general public, although more convinced today than ever before that it is a good thing to segregate the idiot or the distinct imbecile, they have not yet been convinced as to the proper treatment of the defective delinquent, which is the brighter and more dangerous individual.’ The Commission also strongly believed that the ‘intermixing of genes of the general population with those imprisoned’ would be detrimental to society. As one can see, the way that these individuals were seen was horrific. Though Pennhurst was intended to care for mentally-disabled people, many residents at the asylum had no pre-existing mental or emotional conditions whatsoever, yet they found themselves trapped in the institution for the rest of their earthly lives. Women of the asylum were also forcefully segregated from men and kept in small outdoor cottages to prevent pregnancies from occurring.

After 60 years of operation, in 1968 conditions at Pennhurst were exposed in a five-part television news report given by local WCAU-TV correspondent Bill Baldini. The local and national viewing audiences were shocked. Each evening from July 1st to the 5th, Baldini reported his expose, “Suffer the Little Children,” focused on the inhumane conditions at the asylum. This report shattered all beliefs that American’s had held about institutions like Pennhurst and opened their eyes to the blind complacency and indifference of what had been occurring for decades behind the brick walls of Pennhurst. Baldini had video evidence of indignity, neglect, and mistreatment of society’s most vulnerable citizens – including orphans, the elderly, and individuals with intellectual disabilities, who were incarcerated here without their consent. Over its time as a working asylum, Pennhurst housed nearly 11,000 children and adults with cognitive disabilities. They were judged to be ‘degenerates,’ and ‘unproductive.’ Medical experimentation, cruel and unusual punishments, and threats to the physical and mental well-being of the residents were part of Pennhurst’s daily culture. One newspaper at the time even called Pennhurst ‘The Shame of Pennsylvania.’

By the 60s, the Commonwealth of Pennsylvania was giving more than two million dollars a year to Pennhurst and its operations. Pennhurst knew its dirty secrets, it was well-aware of the cruelty it was putting its residents through. When Baldini’s original inquiries were shut down, he somehow gained access into the interior of the complex, finally letting the secrets spill out, which included decades of abuse and neglect. Freedom came in 1987 when the asylum shut down due to lawsuit upon lawsuit once conditions were brought to light. Baldini reported ‘When we started shooting, my crew was mortified. I mean, I had trouble keeping them on the job, because they were literally getting sick from what they saw.’ He later commented on conditions in an interview with NPR saying, ‘Think of a hospital ward of infants and children from the ages of six months to 5 years old. There are 80 of them in … metal cages. They had to attend to them every day, all day. These people were literally lying in their own feces for days.’ If it wasn’t for Bill Baldini’s skepticism, who knows how many more lives Pennhurst would have ruined?

The Pennhurst Asylum was recently purchased by a businessman who has turned the property into a haunted attraction, upsetting people who say that the real estate move trivializes the suffering of those who lived there. Bill Baldini is also upset, saying that the site should become a memorial to the past, not a haunted house for profit. Visitors to the Pennhurst Asylum haunted house can all agree on one thing, spirits from the past do remain.

A site of otherworldly urban decay, the asylum sits stagnant with twisting vines and roots weaving in and out of the buildings, and it almost seems as if nature is trying to reclaim these stones, to destroy the unnatural happenings that took place here. Inside these tombs are hallways filled with old laundry totes sagged with molded clothes and linens, layers of graffiti, rusted wheelchairs, and outside rain sneaking in. When investigated by paranormal research teams, Pennhurst plays its part. Children’s crying and even laughter can be heard echoing throughout, medical implements are moved about, crashing of rusted metal can be detected. The residents still here are not evil; however, they are willing to speak with those who come into Pennhurst respectfully. There have been reports of conjuring and Satanic worship on the grounds, however. Raw, negative emotions filled the halls of Pennhurst years ago, and most of that heaviness hasn’t left, it’s ingrained in the walls, the floors, the ceilings. Today, Pennhurst sits as a part haunted attraction-part memorial to the dead. It is hoped that we do not forget what happened here, as it is necessary to remember mistakes of the past to prevent them from happening in the future.

To read about some of the most haunted locations in Pennsylvania, check out our Top 10 List here.