Most Haunted Spots on the Gettysburg Battlefield 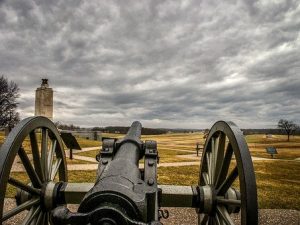 Read a few sentences into any Pennsylvania paranormal article, and you’ll find the battlefields of Gettysburg. Truly one of the nation’s bloodiest civil war battlegrounds, Gettysburg houses thousands of spirits who lost their lives at war. By the time that gunfire ceased and the fields fell silent in early July 1863, 40,000 men lay dead, dying, or wounded on the grounds. However, this article is not solely about the Civil War and the traumas as well as the energetic imprints it left on Pennsylvania’s soil… here you’ll learn of the most haunted spots on the battlefield, the truly horrifying, the deadliest, and the most paranormally active.

We’ve all heard of the horrors of war or know someone who has experienced them first hand. This first-hand description given by a New Jersey soldier that was sent to bury the dead after the battles will most certainly stick with you. He stated what he saw there, “Some with faces bloated and blackened beyond recognition, lay with glassy eyes staring up at the blazing summer sun; others, with faces downward and clenched fists full of grass and earth, which told of the agony of their final moments. There lay a headless trunk, a severed limb or two, they lay in grotesque abnormal positions that contorted their human form.” A horrifying display of the terrors of war, a nation was gripped in civil unrest, its evils as palpable and visually obvious then, as they are today.

Most soldiers were buried where they fell, sometimes with others of opposing side, in shallow unmarked graves. Left laying unknown and restless, their souls flocked to certain spots on this battleground that they suffered most or where they perished. Below are just a few of the darkest.

Devil’s Den is the name given to a rocky ridge covered in large boulders south of Gettysburg. On July 2nd, the Den would earn its keep as belonging to the Devil himself. On that second day of the battle of Gettysburg, the small area surrounding the rocky formations bear witness to intense fighting as part of General Robert E. Lee’s flank attacks. The Den was one of the few battles that were won by the Confederacy, and the battle for the Devils Den laid to rest 1,800 of their own soldiers, as well as 800 Union troops. The Den sits between a western running ridge and a marshy valley. Major Daniel Sickles decided last minute that the marshy fields were where they would stand their ground, which later became known as the ‘Slaughter Pen’ due to the lives taken, hidden in the tall grasses.

Today, the Den holds true to its name, clinging mercilessly to the souls that were claimed there. The boulders themselves hold marks of soldier foot traffic and gunfire. Visitors to the Den report seeing soldiers in Civil War uniforms, appearing and disappearing as soon as they are spotted. Others have heard the resounding noise of cannon fire, running, screaming, gasps, and garbled words, described as if the spirit were choking on blood. If you’d like to learn more of the horrors of Devil’s Den specifically, please check out our article on the Den here.

Built by David Stoner in 1852, this now picturesque bridge hides some of Gettysburg’s darkest secrets. The bridge, located just off Pumping Station Road, was used by both Union and Confederate soldiers throughout the Battle of Gettysburg. One horrific occasion gives this bridge its paranormal allure. Seeing as though most soldiers in the Civil War were young men, nothing more than teens and young adults, abandonment of their posts was seen often, on this occasion three Confederate soldiers tried to evade the battles by donning Union garb and marched with the North across Sach’s Bridge. Their charade did not last long, as they were soon to be discovered as Confederates, and were made an example of on this very bridge. The three men were hanged from the bridge’s thick wooden support beams, the executed soldiers bearing a warning for all Confederate troops passing through the bridge.

These days, the bridge serves as a beautiful backdrop for engagement photos, family outings, and fishing. But come nighttime, when the sun falls below the trees, the bridge strongly reminds visitors of its bloody past. Witnesses have come forward with reports of disembodied heads and faces under the bridge. Pictures have captured apparitions of soldiers, still marching across the wooden pathway even in death. A strong odor of cigar smoke is also reported often. Of course, with its proximity to the battlefields of Gettysburg, the sound of cannon and gunfire is also a common occurrence at the bridge. For more about this bloody bridge, check out our Sach’s Bridge article here.

On July 1st, 1863, the soldiers led by Alfred Iverson’s North Carolina Brigade had arrived in Gettysburg. The men formed into their lines for battle and were confident in their success as they had the element of surprise on their side… or so they thought.

Suddenly, an immense sheet of flame erupted in front of them, Union soldiers had seen them coming and were hiding behind great stone walls, amazed at the number of Confederate soldiers seemingly served to them on a silver platter. Their excitement soon turned to bloodshed for the Confederates, as Union troops surged like an unforgiving ocean wave over the stone walls, taking advantage of the fact that General Iverson did not deploy any advanced lines to ward off surprise skirmishes.

In the days after this battle, most were buried in one large unmarked mass grave, right where they fell. For years after, the farmer that owned the land said that Iverson’s Pits grew the tallest wheat in the entire field. Fertile soil filled with blood… spooky, to say the least.

With the words “Give them hell,” General Iverson sent his troops forward, with the cowardly choice to stay back. He essentially led the men to their deaths, knowing that his outward laziness would cost them their lives. After this deadly mistake, Iverson was considered ‘unfit for command’ for the rest of the battle. To read more about General Iverson, and to make conclusions of your own, click here.

These days reports of spectral figures are given, stalking the pit. Unexplained lights and yelling have also been reported. Reports even date back to the 19th century at the slaughter site, showing that the imprints left here are strong enough to last hundreds of years.

The fields and battlegrounds surrounding Gettysburg created one of the most haunted locations in the country, if not the world. Gettysburg holds violent deaths, unfinished business, unconsecrated burials, and horrors the nation cannot soon forget. All leading to a perfect storm for paranormal events. The town’s streets are crawling with spirits, oozing with history and paranormal phenomena. You cannot throw a stone in Gettysburg without hitting a haunted location. Even tour guides of the historic building are in civil war garb, and battle reenactments are constantly churning the spirits who are stuck here.

Setting foot onto the battlefield at Gettysburg is nothing less than a sobering experience. Seeing the vast grassland, knowing its soil is stained with blood. Visitors state they feel as though gravity has increased, and their breath was stolen from them; some even report feeling faint. Realizing the amount of bloodshed this land has seen, your mind can only imagine the trapped spirits that lay there, gasping for air, their final moments spent in a warzone. The negative attachments created those three days will choke this land for years to come.