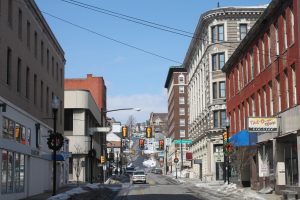 The Mishler Theater is a Beaux-Arts stage and movie theater located at 1208 Twelfth Avenue in Altoona, Pennsylvania, a two-and-a-half-hour drive from Gettysburg. Carrying the highest distinction, it was the first structure of its kind to be built entirely for theatrics, and in the early 1920s, theaters usually occupied the second floor of commercial buildings. Designed by Albert E. Westover, it was made by local theater owner and manager Isaac Charles Mishler in February of 1906. Nine months after its conception and construction, tragedy struck when the neighboring Rothert building caught fire which quickly engulfed the theater, destroying its interior. The theater was soon rebuilt and reopened in 1907.

In 1924, Isaac Mishler announced his retirement to the community and later sold the Mishler Theater in 1931. After it fell into disarray in the mid-20th century from almost a decade of disuse, the theater was considered for demolition in 1965. In response, the Altoona Community Theater and the Blair County Arts Foundation purchased it and began renovations to save the historic landmark. The theater reopened its doors in 1969 and held an inaugural performance of The Sound of Music. In 1973, the Mishler Theater was added to the Register of Historic Places and is nestled in the Downtown Altoona Historic District. Altoona was known for its railroads, especially in the early 1900s, and the railroad station in Altoona was a major layover point for travelers. The city experienced people entering and exiting all day long and created a prime business opportunity for Mr. Mishler…

A Bit About Isaac

Isaac Charles Mishler was born in Lancaster, Pennsylvania, on September 30th, 1862, and moved to Altoona for work on the Pennsylvania Railroad just a few months before his 19th birthday. After several years with the P.R.R., he opened a cigar store on 11th Avenue, and soon his shop became a popular gathering place for men who held an interest in cigars as well as baseball. Later, Isaac became a promoter for professional baseball and even placed teams for the Pennsylvania State League for several years.

His career turned to theater in 1893 when he took over the Eleventh Avenue Opera House, located on the corner of 11th Avenue and 11th Street. At first, he held a partnership with Charles Myers but soon assumed full ownership and management in 1896. He looked over the Opera House until 1907, when it was destroyed by fire. During this same period of time, he was also managing the State Street Theater in Trenton, New Jersey, and the Cambria Theater in Johnstown. He fell in love with theater and even used his own money to build the Mishler Theater in Altoona.

The venue became a popular stop of the vaudeville circuit shortly after its creation. Though it was located in a small city, the theater hosted many famous names, just as Harry Houdini, John Wayne, W.C. Fields, and Al Jolson, to name a few.

Isaac himself best described the theater, and he made the statement that he intended the theater to bring high-class standard productions perfectly to audiences of all kinds. The theater itself could seat nearly 2,000 people and is still considered an architectural feat to this day due to its state-of-the-art interior. The theater even included an early air-conditioning system – made from blocks of ice under the auditorium that ventilated through the floor! The construction also had an eye-catching exterior that was loved by locals and was sure to draw the attention of travelers just passing through the then flourishing industrial city.

The theater had but eight months of success before an untimely fire ravaged the inside of the beautiful building. On October 6th, 1906, the theater was completely destroyed by a fire in the neighboring Rothert furniture store. The building lay in ruins, with nothing left behind but ashes and debris. Isaac was devastated, but he did not hesitate to immediately organize the reconstruction of the Mishler Theater masterpiece.

In 1907, the Altoona Times described the reopening as phoenix-like, rising from the ashes, grander than before. Still open to this day, the theater hosts over 10,000 patrons a year.

The site of entertainment for generations of Blair County residents, Mishler Theater has played a significant role throughout history in Altoona and is loved by all who enter it. Isaac Mishler, the theater’s former owner, and builder loved it as well, and local legend says that he never left, even after his death in 1944 after a battle with illness. He was buried in Altoona where he could be with his theater for eternity. Mishler Theater has created a name for itself in the world of history, but also in the world of hauntings. The site has become a popular haunted attraction for paranormal enthusiasts and ghost-hunting T.V. shows; it was even visited in 2004 by the popular television show Ghost Hunters. Visitors to the Mishler Theater report smelling cigar smoke wafting throughout the grand building, which is a story corroborated by Isaac Mishler’s love of fine tobacco products.

The most credible accounts come from a young Altoona girl named Madeleine Letsche, who accompanied her mother Laura to the Altoona Historic Theater. She roamed around the theater while her mom set up sound and light equipment for the theater’s productions. Starting at the age of two, she became good friends with a spectral figure that she described as wearing funny hats. The man she befriended would wear floppy hats, tall black hats, all kinds of hats. He told her about the theater, its history, and how beautiful she was. As she roamed the theater with this mysterious spirit, he told her about his love for it and about the many productions held there. When she brought this information to her mother, she was in shock. How does one accept that their child may be, in fact, hanging out with the ghost of Isaac Mishler?

A few more accounts come from employees of the theater, technical directors, and managers. One technical manager Brian McConnel claims to have witnessed the ghost of Isaac watching him work from the rafters above. Another instance is when McConnel was hit in the face by water with no seen source. Even Madeleine’s mom has some stories of her own, claiming to have seen a woman in 1930s clothing in the women’s restroom, powdering her nose. She’s heard disembodied sneezes and even seen a man who was offstage looking through a phone book, vanishing when she got close.

Steve Helsel, the operations manager at the Altoona Community Theater, recalls an abnormal experience when he was directing the production Guys and Dolls. He says that ‘he and his lighting designer Sue Polay were working after hours after one of the final rehearsals to finish some last-minute adjustments to the lighting on the set when something odd occurred in the late hours of the night. We were both standing on stage and she explained that she had added two special lights up in the balcony on both sides of the theatre to hit the lead character for his introduction into the song ‘Luck Be a Lady Tonight.’ She said she had put an X of spike tape on the stage floor to show him where to be standing when he gave his cue line for the song, and then the light board operator could snap on those two lights quickly on the musical cue. It was during this explanation that Sue stood upon the “X” to show Steve where the actor would be standing when said lights turned on and lit up the position in which she was standing. Helsel continues to explain the startling event: ‘We both looked at each other, eyes wide open, and Sue said to me ‘who did that’ and I said ‘I don’t know because there’s nobody else here.’ And Sue said ‘I think we’ve done enough for tonight’ and stepped back off the X and the lights went out. We pretty quickly shut everything down for the night and left the theatre.’

Who was the unseen entity that lit the stage up for Sue, making her the star of the night? These questions, as well as many others, are unanswered, but it is believed that Isaac Mishler still resides at the Mishler Theater, keeping an eye on its operations from beyond the grave. Pennsylvania is one of the United State’s most haunted states! Check out out article on the haunted Hotel Bethlehem here!