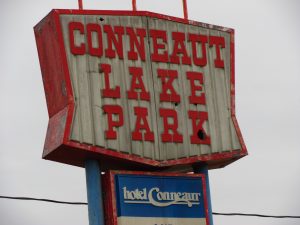 Hotel Conneaut is an expansive, gorgeous hotel located in the middle of Conneaut Lake Park, a summer resort and amusement park located just a half-hour outside of Pittsburgh. Known as ‘The Crown Jewel of Lake Conneaut,’ the park itself was founded in 1892 as an exposition fairground meant to show livestock, machinery, and industrial products coming out of Western Pennsylvania. During its early years, the exposition park included a dance hall, a convention hall, and a bathhouse. Ownership of the park transferred in 1901, and several hotels were built on the property to accommodate all the guests who began to spill into the area during summer vacations. The area soon became a popular summer tourist hangout due to its comfortable lakefront presence, exciting thrill rides, and cool breezes. Many of the park’s original buildings were lost to a fire in 1908, but new concrete block replacements were built, including the famous (and haunted) Dreamland Ballroom. Today, the Hotel Conneaut stands strong, withstanding the lake’s harsh winters to preserve the history that lies within.

The park itself was renamed Conneaut Lake Park in 1920 to reflect its change to a more recreational space. Carnival rides were added over the years, including The Blue Streak roller coaster, which is now on the national registry of historic roller coasters. Hotel Conneaut, still a family-friendly summer destination, is also a favorite of paranormal enthusiasts and ghost hunters since the hotel is a well-known haunted hotspot, with most activity occurring on the third floor. Hotel Conneaut has had its fair share of tragedy, historical happenings, and bad luck over the years. Being the site of fires and deaths, the hotel houses some forlorn spirits whose lives were tragically ended right here.

In 1943, during the park’s heyday, a large portion of the hotel was destroyed in a blazing fire. There is a story of a woman named Elizabeth who was on her honeymoon with her newlywed husband when a bolt of lightning is said to have hit the hotel’s wooden roof, starting the inferno. Legend has it that her husband managed to escape the massive flames, thinking that Elizabeth had already evacuated. But he was dead wrong. Elizabeth ended up trapped as she searched for him, calling his name in vain. She perished in the fire and is one of Hotel Conneaut’s many resident spirits. She and her husband stayed in room 321 when the fire started, and paranormal researchers have reported hearing her yell out and crying for her long-gone husband. These days, she is seen wandering the third floor in her wedding gown, trailing a phantom scent of jasmine perfume behind her. The room itself is known for its orbs, whispers, dirty linens, and windows that open and close by themselves. Elizabeth doesn’t stay on the third floor exclusively, however. She has also been seen at the adjoining amusement park and Dreamland Ballroom. Elizabeth is Hotel Conneaut’s most famous entity, so much so that the hotel named its bar and restaurant ‘Elizabeth’s Dining Room and Spirit Lounge.’ Guests to the hotel report her presence most often throughout the hotel and the surrounding land.

Elizabeth isn’t the only lost spirit inhabiting Hotel Conneaut; she’s said to share the space with multiple others. A young boy died here when he was attempting to ride his small metal tricycle down the staircase, not under any adults’ supervision. He lost control and fell down the large staircase, which killed him. He has been reported talking to guests and calling out for his mother in the hallways. There are also reports that one of the hotel’s old chefs stabbed and then dismembered a local butcher in the hotel kitchen. Apparitions of a couple can be seen floating about the first-floor Grand Ballroom, enjoying each other’s presence. No reports of who this couple is have been made, but it’s easy to assume they just loved the Hotel Conneaut so much during their lives together that they come back for a visit every now and then. Even a soldier has been spotted sitting in a tree in the hotel parking lot, watching guests as they arrive and depart. A ghost of a former employee has also been reported numerous times. He has only introduced himself as John and joins new visitors in the lobby, perhaps to help check them in and get them acquainted with the hotel and all of its features.

My name is Amber, and I have stayed at Hotel Conneaut a few times myself with my paranormal research group. From the moment I walked through the door, the hotel almost consumes you. You don’t remember that there is a world outside of it; it swallows you in. It’s like walking into another time and place. The Hotel has kept all its antique and classic features. From the moment of check-in, I remember feeling watched, almost studied. I felt followed as I went up to my third-floor room. Once there, I opened the door to an antique-looking bathroom on my left with dim lighting and a small room with vintage beds and linens. Photos of women in petticoats and dresses hung on the walls. There was a large wooden dresser with an antique hairbrush and mirror atop it. The room was freezing in the middle of the summertime. I remember wanting to open the window to let some heat in, but the window itself was stuck—strange and worrisome due to the history of fires here. Nevertheless, I unpacked my weekend bag and settled in as best I could.

In the evening, we were due to start a hotel-wide investigation of the hotel, so I decided to walk the hotel alone to gather in the surroundings and get myself comfortable. Since this was my first time visiting, I didn’t know any of the hotel’s history. I like to go to a place and see what I can gather without any outside influence. I was on the third floor when I saw smoke floating in the hallway. I could smell the smoke as well, it was a strange experience, and I decided to tell hotel staff since the clouds started to become more prominent as I wandered the hallway. At this time, the hotel was not open for business, and my group and I were the only visitors there. I hurried downstairs to the check-in desk, thinking that a fire had started in the hotel. When I brought it up to the hotel staff, they weren’t surprised. They said it happens all the time and told me of the fire that occurred here back in 1943.

Later that night, we were amid our investigation when we were gathered in one of the guest rooms. I had a device recording audio as we asked a series of questions. While we didn’t have any paranormal experiences during that time, afterward, when I listened to the playback of the audio I had captured, I heard a child’s giggle, followed by a loud ‘mommy, mommy’ in the hallway. The youngest person at the hotel at the time was 22 and utterly silent during the recording. None of us had heard this disembodied voice when we sat in the room, and we were all thoroughly spooked by it. At one point in the night, I was alone at the bar next to the Ballroom. The team had set up cameras facing the back of the bar, which we were genuinely thankful for because I saw one of the bar’s cabinets open and close on its own multiple times as I sat there in silence. It was almost as if a ghastly bartender was trying to serve me.

Others also reported unexplained happenings in the group. While recording on a few personal phones, one team member recorded a spirit saying her name repeatedly. How did the spirits here know who she was? Were they listening to our conversations? Another instance of paranormal phenomena included feelings of dizziness on the stairs in the hotel and nausea around certain rooms.

Have you ever stayed at the haunted Hotel Conneaut? Will you after reading this article? We’d recommend heading there in the heat of the summer, as the hotel is almost always a bit chilly due to its plethora of spirit residents! For more paranormal Pennsylvania phenomena, check out our Top 10 List!