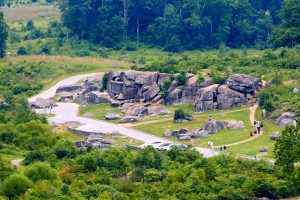 During the second day of fighting in the Battle of Gettysburg, one of the worst in the Civil War, Colonel Robert E. Lee had decided to go against the advice of his second-in-command, James Longstreet, and launched an attack on the Union. His stubbornness resulted in a staggering 35,000 deaths over the next two days, reaching a crescendo at Devil’s Den, a formation of rocks smack in the middle of Gettysburg Battlefield. You can imagine why we have to make an article on the Hauntings at Devil’s Den considering that intro.

Leading up to this bloodbath, Lee was grieving the loss of his most-trusted General, Stonewall Jackson. It may very well be this loss that caused Lee to act rather erratically going forward. Wanting to bring swift justice to Stonewall’s death, the Colonel devised a new plan of attack that would focus on Cemetery Hill.

But after giving direct orders for his newly-appointed general to attack Cemetery Hill, Lee again found himself faced with internal opposition. His general outright refused to lead the onslaught, citing that Union forces were too powerful.

It’s interesting to think what the outcome of the war might have been had Lee taken a different approach and heeded the advice of his fellow officers. While the Confederates were initially successful in gaining control of Devil’s Den and the surrounding land, Union forces eventually overcame Confederate efforts, putting a stop to any further advancements.

Beginning on July 1, 1863, the Battle of Gettysburg resulted in more losses of life on American soil than any other time in history. The majority of those deaths took place on Gettysburg Battlefield, where Devil’s Den rests. Along with massive rock formations known at Big Round Top and Little Round Top, they are the highest points found on the battlefield.

Opposing forces would often station sharpshooters at these points to stave off incoming troops. One such instance saw the deaths of Union General Stephen H. Weed and Lieutenant Charles E. Hazlett when a Confederate sniper shot them from afar.

Beginning of the End

Longstreet continued to protest Lee’s plans of attack, but it was no use. The Colonel was stubborn to a fault and his actions ultimately cost him the war. Launching a bombardment of over 150 Confederate guns, the Union again outflanked them. Using stone walls as cover, the Union opened fire on the rebels.

Soon, regiments from Ohio, New York, and Vermont joined the Union in their attack. Lee’s troops found themselves boxed in from every angle, resulting in the annihilation of more than half of the Confederate army.

One can only imagine the impact that these deaths had on the area. It was the largest loss of life over any two days in the American Civil War. Many locals and paranormal investigators agree that Gettysburg Battlefield is home to more supernatural occurrences than almost anywhere else in the city.

With deaths numbering in the tens of thousands, it’s easy to see where Gettysburg gets its haunted lore. There are very few places more haunted than Devil’s Den and the surrounding area. The tragic events that took place there would set the stage for numerous bizarre occurrences and strange encounters in the coming years.

Devil’s Den is a major attraction for both tourists and ghost-hunters alike; many of whom often bring cameras and recording devices in an attempt to capture some of its ghostly charm. However, such equipment is reported to malfunction or completely shut down.

Visitors will often experience their cameras or cell phones glitching out when trying to take a picture. The same is said for paranormal investigators when attempting to conduct research; their equipment will simply cease to function.

Interestingly, when they move away from Devil’s Den and the Gettysburg Battlefield, their devices will miraculously begin working again.

There are several reports of ghostly apparitions appearing right in front of tourists, hauntings at Devil’s Den, but as soon as they try to snag a photo, their devices will flicker and die.

Devil’s Den has been the source of many otherworldly encounters for quite some time. One compelling tale comes from a Harrisburg Telegraph article dating back to 1939. It tells the story of a man driving along in his car when he noticed two uniformed soldiers carrying rifles and walking on the side of the road.

The man pulled over to them and noticed that their uniforms were quite old. The fellow asked the two men if they needed help, and they replied that their friend was injured and indeed needed assistance. The soldiers prompted the man to follow them to a nearby tree, which was propping up another one of these uniformed soldiers; this one dying from a severe chest wound.

Panicked, the man said he’d get help and frantically drove to the nearest gas station. Upon telling the cashier what he had just witnessed, he was told not to bother and that the soldiers wouldn’t be there when he returned. Apparently, this was happening to many folks who were passing by the area back then.

Another tale from many years ago involves a couple of hunters who allegedly got lost near Devil’s Den. While searching for the way out, they saw an apparition standing on one of the largest boulders.

The figure began pointing to one specific area that, lo and behold, wound up being the way out that the men were trying to find. When the men turned around to thank the person, he had vanished into thin air.

Throughout the years, a shoeless entity has been known to approach tourists with helpful advice as to where they need to go. Thought to be the spirit of a Confederate Texas soldier, this ghost has been captured in photographs going as far back as the 1970s. He’s even showed up in pictures that didn’t detect him when initially snapped.

In a story that appears to validate the shoeless ghost, a woman had one day gotten lost as she was traversing the rock-laden land. She began nervously looking for the way out, just as the hunters from earlier had done all those years prior.

Without warning, a man appeared, pointed to the distance, and said, “What you’re looking for is over there.” And just like that, he vanished. The woman later told park rangers what had happened, and when they asked what the man looked like, they could hardly believe what they were hearing.

Unbeknownst to the woman, she had just described in perfect detail what a Confederate Texas soldier would have looked like during the Battle of Gettysburg.

Not to be confused with the famous Marvel comic character, a poltergeist known as the “Ghost Rider” is known to wander near the den. He will materialize instantaneously, accompanied by the sounds of gunfire and shouting. He will then vanish as quickly as he appeared, leaving few clues to his true identity.

Another chilling story comes from a young woman who was climbing the rocks with her friend. As she rounded one of the large boulders, a hand reached up from a fissure and grabbed her ankle! Looking down, she saw a young man in a Civil War-era uniform.

Screaming, she looked up for her friend. But just as quickly as she yelled for help, the entity had disappeared. Scouring the area, no one was around who even remotely fit the description of who she saw.

Well-preserved throughout the years, Devil’s Den remains a top tourist attraction. Its stunning rock formations have long been a point of interest, garnering attention from people of all walks of life. Geologists come to appreciate the natural structures just as ghost-hunters come for its paranormal qualities.

While it was referred to as Devil’s Den long before the American Civil War and Battle of Gettysburg, the death that occurred there has only served to cement its name as an area not to be taken lightly.