The Most Haunted Locations In Easton, PA 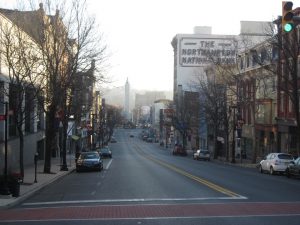 Just a 2-hour drive East from the city of Gettysburg, Easton played a significant and prominent role in the history of the United States of America. The unassuming city was one of the first places that the Declaration of Independence was signed and read right on the steps of the Old Courthouse (a marker in the city’s square now commemorates the occasion), and the city is celebrated every single year during Easton Heritage Day. Easton was planned out in 1752 by William Parsons at the request of Thomas Penn. The land was obtained from the Delaware Native Americans in the notorious Walking Purchase of 1737 that forced native tribes to resettle. The town was named for Penn’s father-in-law’s English estate. The city itself is abundant with centuries-old buildings, all who carry amazing stories and entities inside of them. Below are just a few of the most Haunted Locations In Easton!

State Theatre Center of the Arts

Truly one of the most famous spirits in all of Lehigh Valley, the ghost that haunts the State Theatre Center of the Arts has made a name for itself! Listed on the National Register of Historic Places, the State Theatre’s building was first constructed in 1873. Once known as the Neumeyer Theatre, the State Theatre wasn’t erected until 1925 when architect William Lee of Philadelphia was employed to design and build a larger, more impressive theater. He was inspired by old Spain’s architecture as well as Italy’s villas. Hosting over 53 performances yearly and nearly 60,000 patrons, the theater has become a loved piece of history in Easton.

The theater isn’t only adored by the living, though. Late J. Fred Osterstock is said to haunt the State Theatre. He managed the company that owned the theater itself until his death. The theater was his pride and joy, and even the separation of life and death hasn’t been able to pull him from the halls. Today, visitors to the theater mention loud footsteps in empty hallways and a man mumbling to himself, almost as if he’s reading off his to-do list for the day in his head. Locals remember Osterstock with the FREDDY awards for high school performing arts students. It’s never a surprise to see Fred himself walking around backstage during the ceremony!

Filled with books upon books, the Easton Public Library is also filled to the brim with spirits! The building was opened on top of an old and unused cemetery at the turn of the century in 1903. The remains of more than thirty people had to be removed and relocated into an underground cement vault which was eventually paved over and made into a parking lot. The library’s staff often tell of books flying from the shelves by an unseen force and desk drawers open and slam shut on their own. Somebody needs to let these spirits know to keep quiet; it is a library!

A large rock on Hezenkopf Road is said to have been cursed during Native American rituals used to get rid of lingering evil entities. Hexenkopf loosely translates to ‘witches head’ in German and is known as a residence of witches and demons.

It seems as if the witch hunt hysteria from Salem has traveled to Pennsylvania, as a story of a woman who was sentenced to stand on the rock for six hours four times a year is told to this day. She was accused of bewitching a horse, and some farmers believed that their horses are drenched in sweat and powerless because the witches have put them under a spell. The rock itself has a strange glow to it, but critics of the paranormal state that it must be some coating of rare minerals. An unusual amount of car accidents also occur near the rock, but that’s just coincidence… right?

Formerly known as The Black Horse Tavern Inn, Stemies Place was a popular hangout for the mafia in the 1920s and is said to be the home of at least four spirits. Two of the spirit’s names are unknown, but it is said that the ghosts are those of former children who passed away tragically in the river just behind Stemies. Janet, one of the resident spirits, is said to turn the jukebox. Janet worked at Stemies for many years and was a friend of the owner in life. She said that she felt most comfortable and at home at Stemies, and she must feel the same way in the afterlife.

Another spirit is rumored to be that of Savrio Damiano, or “The Wop.” He was a mobster back in the 1900s who was gunned down while on a phone call with a man named Sam Scalleat. After he sustained several gunshot wounds and fell to the ground, Damiano dragged himself down the flight of stairs leading into the basement, where he died shortly after. Today he’s said to be seen wandering around the basement as well as the land surrounding Stemies Place. After the restaurant opened for business, staff members began to see Savrios’ shadowy figure around the restaurant. Even dogs get spooked just by stepping foot in the building, which speaks volumes as it is said that animals can sense things that we cannot.

In the middle of the Delaware River, just outside of downtown Easton lies a small island known as Getters Island. The island has a gruesome past, as it was the execution site of a man named Charles Getter. The wild story behind his death involves a woman accusing him of fathering her newborn child. In Early February of 1833, Margaret Lawall set into motion the actions that would bring her death, as well as the death of her child’s father. He was in love with and engaged to another woman, Mary Hummer, but married the woman who accused him of fatherhood. However, the marriage didn’t last ten days, to be exact, as Charles hated this woman and hated the child he never believed was his own.

He became fed up with the marriage arrangements, and the day after the wedding, he had inquired about divorce with the justice of the peace. He was told that he was not allowed to file for divorce. He told law enforcement officers that he would have Mary Hummer by any means possible and that he would do whatever he could to marry her. He even stated that he would be rid of his wife in less than three weeks and wished she would drop dead. His determined anger got the best of him when he strangled her to death a few hundred yards from her residence in a field. Newspapers at the time reported on the murder, stating that Margaret was found lying on her back with indentations of fingers around her neck. Getter was almost immediately accused of the homicide, and when he was questioned by police about his whereabouts that night, he replied emotionless, “Is she dead? I haven’t seen her since the day before yesterday.”

Charles Getter was soon brought out to Getters Island and executed by way of the gallows. An immense number of spectators showed up for the public hanging, and when he was set to be executed, the rope tied around his throat was broken. He hit the ground with brutal force and had to wait another twenty minutes to be hung again. Previous to his execution, he did confess to the murder of Margaret.

Today, boaters who pass the island can hear a man yelling from in the woods and see an apparition with a small lantern wandering the shores in the middle of the night.

Have you been to Easton yet? The charming little town is a bucket list destination for many, and who can blame them? With all of the history and hauntings, Easton is one place you won’t want to miss! For even more of Pennsylvania’s haunted hotspots, check out Pennsylvania’s six haunted natural wonders!