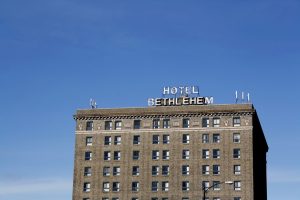 With a history of just over 278 years, Hotel Bethlehem is one of Pennsylvania’s oldest hotels, and of course, one of its most haunted. Unlike most of the paranormal locations we’ve covered here before, the spectral residents of the Hotel Bethlehem are as friendly as can be. A member of Historic Hotels of America and the National Register of Historic Places, the hotel boasts 125 guest rooms. It is a centerpiece in the Central Bethlehem Historic District. Bethlehem, Pennsylvania, where the hotel is located, is about a two-hour eastern drive from the city of Gettysburg.

Bethlehem’s famous ‘first-house’ was built in 1741 when George Washington still occupied office as president and was located on the site until about 1823, when the Eagle Hotel replaced it. The original 1741 house was built by Moravian missionary Count Nicholas Von Zinzendorf. Then, almost 200 years later, in 1921, Hotel Bethlehem took its place. The first hotel was remodeled in the 1870s but was demolished in 1920 for a more fireproof and up-to-date structure. The Bethlehem Hotel Corporation built the Bethlehem Hotel as it is seen today starting in 1921 with funding from millionaire steel-tycoon Charles Schwab and others at Bethlehem Steel. After the closure of Bethlehem Steel in the 1990s, the hotel lay vacant, with no living guests walking about its halls for quite some time. Nearly a decade had gone by before a group of local investors purchased the property and renovated it extensively in the late 1990s. The hotel has been the lodging of many-a-men throughout its years, including Winston Churchill, Henry Ford, Thomas Edison, and even Amelia Earhart.

The hotel has seen the roaring 20s, the blast furnaces provided by Mr. Charles Schwab and his companies, and even the humble group of Moravian Missionaries that settled this piece of land after risking life and limb to cross the Atlantic Ocean into the new world.

Known for its unmatched hospitality since the early 18th century, it’s not surprising that there are at least four reported spirits residing in the hotel. Let’s just dive right into who checked into the Hotel Bethlehem but never checked out!

Born right here at the hotel when it was known as The Eagle in April of 1866, May Augusta Yohe was the granddaughter of Caleb Yohe, who owned and operated the gorgeous Eagle Hotel. There are numerous accounts of May performing for guests in the hotel’s lobby with her ethereal singing. She was so talented that some of the guests decided to pool their money and send her to Paris for formal Opera training. In 1888 she was making headlines across the country as one of the biggest stars of her time! May was also the victim of bad press, and her love life was usually plastered across newspapers for all to see.

In the 1890s, she set out to perform in London for Queen Victoria’s son, Prince Edward. Here, she met Lord Francis Clinton Hope, a wealthy British lord, and married him almost immediately. He owned a very famous jewel called The Hope Diamond, which she wore on many occasions. Sadly, her marriage to Lord Hope did was not eternal like the diamond she wore so beautifully. By the turn of the century, she made headlines again for leaving Lord Hope for an American soldier. He ironically stole all of her jewelry, and she divorced him as well.

Even though May was a bit unlucky in love, her best times are said to have been right at the hotel, singing and dancing for all of those who would watch. Visitors say that you can still hear her singing and tinkling the keys of the lobby piano! Her apparition has been reported in the 3rd-floor exercise room as well as the lobby areas.

Francis was born in Wurtemburg, Germany, in September of 1732. He came to the American ‘Colonies’ when he was just six years old. The Moravian Bishop Spangenburg made an important impression on him when he was very young. He was known to be a fearless chap with a total disregard for danger. His job was that of a courier, which was extremely dangerous in colonial times. He came close to death a few times, once when he was thrown from a horse’s back and broke his neck, another when the horse he was riding broke through some thin ice and sank them both into freezing water.

After all of his brushes with the reaper, Francis decided to learn a trade and took up cabinetmaking. Later, he met a woman named Anna Graeff, fell in love, and married her in January of 1762. They remained happily married for 53 years, and although they had no children of their own, the couple happily raised the Missionary’s three children when they were sent to be educated at the famous girl’s Seminary.

His honesty, faithfulness, and perseverance won him the respect of everyone around him. It was in this that he found his true calling, attending visitors to Bethlehem. He conducted himself with unimaginable candor, a sunny disposition, and readiness to do any act of kindness that he could. People absolutely loved Francis, and those who loved him called him dad. Francis died on April 4th, 1822, but hotel staff swears that he still tends to guests at Hotel Bethlehem, appearing mainly in the boiler room area of the hotel.

In 1833, Mrs. Brong and her husband were the landlords of the Eagle Hotel and were terminated by the Moravian committee when it was learned that Mr. Brong would join every single guest for a drink if it were requested of him. He was often removed by the hotel’s bartender and sat on a nearby bench when he was too drunk to sit up!

Mrs. Brong had her own strange habit of not wearing shoes or stockings in the hotel, a bizarre issue for the times, and guests who arrived fresh off a stagecoach would be greeted by a woman with her legs completely exposed, which must have caused quite the commotion.

Strangely enough, kitchen staff speaks of seeing an apparition of a woman in period clothing without shoes or socks, which can only be assumed to be Mrs. Brong. She is most encountered by guests and staff in the kitchen and restaurant areas of the hotel, walking around barefoot!

Room 932 has a very strange record of paranormal activity. Most famously, a couple who stayed in the room reported being awoken by a see-through man standing in front of their bed asking, ‘why are you in my room?’ When they switched on the light, he vanished.

There have been multiple accounts of reflections appearing in the room’s mirrors that disappear moments later. Guests who have no past knowledge of the room experience happenings that defy the laws of physics, like papers standing on their edges. Books fly off desks and nightstands, lamps flash, and the bathroom wallpaper is reportedly turning pink. There is also a multitude of photos of 932 with orbs flitting about the room!

Room 932 is the most requested room for booking, which is no surprise, as guests want their paranormal money’s worth when visiting this haunted lodging!

Have you ever visited Hotel Bethlehem? Do you think you’d be brave enough to stay a night in room 932 to figure out the identity of the spirit there? Whatever the case, Hotel Bethlehem deserves its spot as one of the top haunted hotels in the United States and proves its standing with its variety of spectral residents.