The Ghost Of General Sherman. 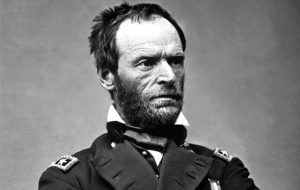 A man is measured by what he leaves behind, by his legacy, by his memories and triumphs. You have to be a special kind of badass, when the big cheese in charge goes, “Sherman was scary… That SOB was terrifying. We have to honor him? Name the biggest killer tank in history in his stead.” General Sherman was and quite possibly is such a tough as nail desperado that when he died Death had no other choice but to grant him walking rights, the Grim Reaper sick and tired of getting his butt handed to him. Today, we’re going to explore Sherman the man, Sherman the legend, and Sherman the hombre who even the great beyond couldn’t keep down. For today’s chapter of Haunted Gettysburg, we are going to unearth the bones of a hero and have a chat with the great Civil War ghost of General Sherman.

Let’s get one thing straight right out of the gate, this isn’t an exploration of Sherman’s life. This is a flyby of certain key moments. You really can’t do the fella’ justice with just a couple of paragraphs, there are books – huge, massive tomes that can swat down airplanes – about General Sherman. If you need a quick recap, then, by all means, waltz on down to Wikipedia and get the abridged and dry as dust retelling of his life. This is a tale about General Sherman’s tenacity, bullheadedness, blind savagery and, above all his spirit… You really can’t talk about the ghost of General Sherman without invoking his spirit.

The Ghost Of General Sherman 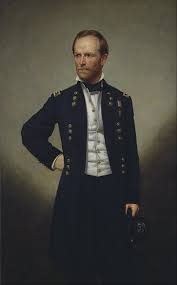 William Tecumseh Sherman, the man that historians and theorists would later declare as “the first modern general”, was born in Ohio to a politically prominent family. Sherman was one of eleven kids who were left penniless, without an inheritance and partly destitute when his father keeled over.

Sherman was then raised by a Lancaster neighbor and family friend. The man, Thomas Ewing Sr, would prove pivotal in Sherman’s life, partly due to his Whig Party connection, the fact that a few years in the future he would land the role of Secretary of Interior, and a rather fetching daughter.

Senator Ewing secured an appointment for 16-year-old Sherman as a cadet at West Point Academy.

Sherman excelled, graduated in 1840 and was sent all over the US. He was battle-hardened in two wars – the Second Seminole War another spooky location, The Mexican-American War, that’s right, the Alamo – and later send on various scouting missions across the world.

In 1850, Sherman was promoted to the rank of Captain. That same year, on May 1st, he married his foster sister, Ellen Boyle Ewing… the aforementioned fetching daughter.

For eleven years, Sherman tried to live a calm and orderly life. He ran a couple of business ventures, did his best to keep out of trouble and meditate on the merits of peace.

Then, the South seceded and Sherman blew a gasket. He called in all his old friends, his political connections and basically maneuvered his way into getting a commission in the regular army.

In the span of a year, Sherman was shot twice, lead a disastrous raid at Bull Run, and still somehow managed to impress President Lincoln. The President saw the mad-eye Sherman and decided to promote the firecracker. On July 23rd, 1861, Sherman finally got the stripe and became brigadier general Sherman.

Sherman and the Civil War

Sherman lost his marbles almost as soon as the Civil War began.

“That melancholy insanity to which your family is subject.”

Ellen Sherman, the General’s wife, in a private letter to Senator John Sherman.

Sherman had finished his first commission and had distinguished himself in the Battle of Bull’s Run when he fell off his rocker. The man was on a high and quite frankly one of Lincoln’s favorite pets. Nonetheless, what Sherman saw on the battlefield had frayed his nerves and made him a dour pessimist. He was certain that the Union’s tactics wouldn’t succeed, and that the President was “too lenient.” There was no victory to be had pussyfooting around hard decisions… translation, “human rights and all that nonsense is for sissies. You get the enemy in the crosshairs and you plug them, period.”  A shroud overcame him to the point were he penned: “suicide seems an honorable course”. Sherman, a year into the war, had a mental breakdown and the army tried to swept the brash upstart under the rug. “Insane” was how the Cincinnati Commercial describes his state.

During his recovery, Sherman was approached by General Ulysses S. Grant. Grant, another take no caca “let God sort them out” bastard, had heard of Sherman’s ramblings and read his correspondence. Grant was amazed by Sherman’s passionate pleas for harder methods.  Sherman had the cojones to call out senators and even the President – and Lincoln huge and packing muscles. Sherman had been blacklisted in Washington and branded a nutcase, mainly because he had the audacity to look the tree trunk that was honest Abe in the eye and go: “you’re a yellow liver chicken…” Grant liked the fire in Sherman’s belly, he saw in the battle forged General a kindred spirit and someone that could win him a war.

A friendship was forged, and Grant having just been promoted to Commanding General of The Army, went:

“Cry Havok! And let slip the dogs of war…”

And Sherman, no longer held by a choke collar, howled.

Total Warfare, that was Grant’s policy towards dealing with the traitorous South. While Lincoln was off on the Hill trying to woe politicians and policymakers, his cronies on the frontline were employing tactics that nowadays would have been tried at Nuremberg.

Grant wanted to strike the fear of God into the enemy, he allowed Sherman to call upon his inner Sith Lord. Grant was convinced that the key to conquering the South was to break their backbone and only Darth Vader, I mean Sherman, could do it. To rip their spirit apart, shred their will to wage war, make them rue the day they were born. To destroy the Confederacy’s platform, psychologically and economically, Grant employed his most ravenous and remorseless attack dog… Sherman.

Sherman’s advance through the South, particularly through Georgia and South Carolina – Savannah seeing the terror first hand – was akin to Moses’ Biblical Plagues. The man wrought with him widespread destruction and wanton violence. His tactics were absolute and devastating. Among his many practices was what his enemies would call “Sherman’s Neckties.” Knowing that iron was scarce and that railroads were a prized commodity, Sherman deliberately tasked his officers to heat up train rails and bend them around trees. “Sherman’s neckties”, as they were called, made repairs incredibly difficult and hindered the South’s ability to move troops and, more importantly, medical supplies.

The place he marched through, the place he set to the torch… Sherman killed everything and then salted the earth in his stead.

“Sherman would turn a blind eye to practices that were outlawed even back then. He wanted to win the Civil War no matter what. He let his troops loot, pillage, rape and basically run wild after each victory. In order to bypass regulations, Union soldiers charged with looting – an action forbidden – were employed as “bummers” and officially tasked with ransacking homes in search of rebels. The damages done by Sherman during his march were nothing short of war crimes.”

The Burning Of Columbia

One of the many accusations leveled against Sherman was that he deliberately allowed his troops to burn down the city of Colombia during one of the most violent moments of the Civil War. To this day historians disagree on Sherman’s guilt in the whole bloody affair.

In his defense, the general wrote, in his Civil War memoirs:

“If had made up my mind to burn Columbia I would have burnt it with no more feeling than I would a common prairie dog village; but I did not do it …”

He then placed the blame on Confederate LT. General Wade Hampton III, whom he labeled a “braggart.”

“Generals who terrorize civilians and seize or destroy their property are not usually lionized for such actions. . . . Yet Sherman has attained an illustrious place in American history because of his campaigns of destruction, rather than in spite of them, and his words and actions have often been cited as an inspiration by his successors in the wars that followed.”

—from the introduction to Sherman’s Ghosts 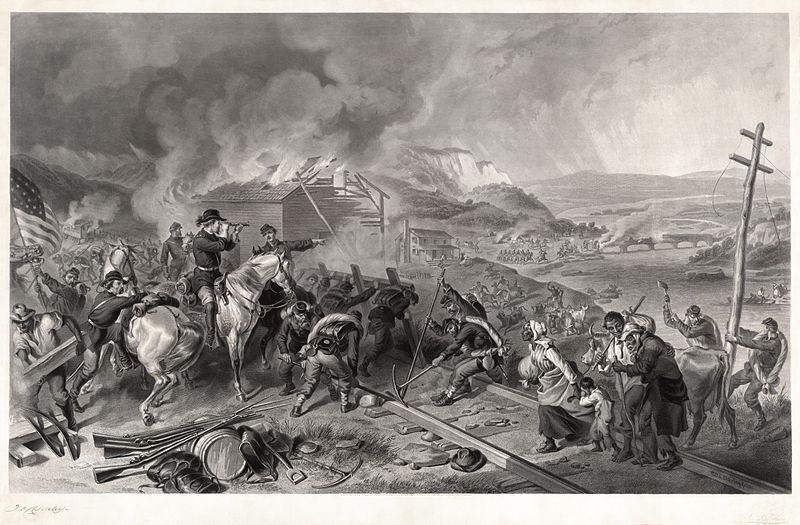 The Ghost Of General Sherman

If you read Sherman’s memoirs – aptly called “Memoirs” – one of the best-known first-hand accounts of the Civil War, you’ll notice something rather peculiar about his character… He didn’t give two YOU KNOW WHAT about absolutely anything. The man had the computing power of a Terminator; once he got a scent and a mission he would Schwarzenegger his way through the whole of creation.

Sherman was not an abolitionist and didn’t even care about “Negro equality.” For that matter, he didn’t believe in any sort of equality. In Sherman’s views, everyone was a tool to be used against the enemy.

General Sherman was a brilliant tactician and strategist that was thankfully born in the Union and raced there, otherwise, he would have gunned down Lincoln himself and the war would have turned out differently.

The ghost of Sherman is said to haunt just about everything that has his name, was partly trampled by him, or has a six degree of separation – like that Kevin Bacon game – to his aura.


Grant has a Whiskey named after him… Sherman has the M4 Sherman; a Medium Tank that basically ran over Nazis in World War II. Those 75 mm monsters, that have been used in almost all war theaters since the first prototype was wheeled out of the Ford company, are said to be haunted by the Ghost of General Sherman. Unlike other phantoms out there, hellbent on scary people silly, Sherman’s haunt – legend has it – strengthens a soldier’s resolves and makes him into a bloodthirsty warrior.

William died of pneumonia in New York City on Valentine’s Day 1891. Even though his body now lays in Calvary Cemetery St. Louis, the ghost of general Sherman roams the lands he’s conquered and the weapons he has inspired.  That’s right, even after death, Sherman’s spirit is still claiming lives and stumping on the throats of America’s enemies.