Gettysburg, Pennsylvania. You were more than likely taught of its history throughout your years in school. But if time has since eroded such teachings from your brain, let us take a step back to cover the basics and get us up to speed on its history and why it relates to the subject matter.

Fought in the year 1863 from the dates of July 1st through July 3rd, the Battle of Gettysburg is largely considered one of the bloodiest wars to occur on American soil. Not only were numerous lives of soldiers lost, but many innocent civilians fell victim to the war and the tragedies that come with it.

Taking place during the American Civil War, conflict waged throughout Gettysburg, Pennsylvania between two factions known as the Union and the Confederates. The Battle of Gettysburg resulted in anywhere between 46,000 and 51,000 casualties.

Paranormal Encounters at the Orphanage 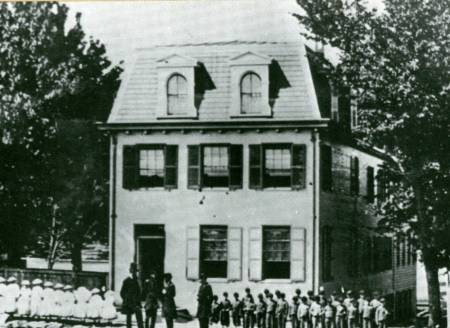 It was a happy homestead in its infancy, even once visited by Ulysses S. Grant in a campaign to drum up donations in support of the orphanage. But after its initial headmistress was replaced, it promptly went to hell in a handbasket.

A wickedly evil disciplinarian by the name of Rosa J. Carmichael soon took over operations of the orphanage and treated these poor, innocent orphans like dirt. She even went so far as to utilize the home’s basement as a dungeon.

This dungeon was used to discipline “unruly” children, with its history becoming notorious for the makings of ghostly lore.

So much, in fact, that the popular television series Ghost Adventures crew spent a night in this dungeon of a basement in order to try to communicate with the spirits of Carmichael and the children who were tortured here.

It has been reported that Carmichael actually went as far as to chain the children in her care to the walls of the basement. It is harrowing to think of what else she may have done in her efforts to discipline her orphans.

It is because of these monstrous actions that the National Homestead is believed to be so rife with paranormal activity. Couple this with all of the lost souls from the Battle of Gettysburg, and you have the makings of one truly haunted abode.

Aftermath of the Children’s Orphanage

Over time, the National Homestead was turned into a soldier’s museum that served to allow tourists to get an inside look at life during the American Civil War, as well as to experience the aftermath and what horrors took place within the orphanage’s basement.

Letters written by soldiers were available to be read, as well as recorded history from civilians who lived through the war. It was an interesting look into the lives of those who provided first-hand accounts of the miseries that come from war.

Although the museum closed down in 2014, it has since been reopened by the Gettysburg Battlefield Tours group, once again allowing tourists and ghost-hunters the opportunity to catch a glimpse of spirits and other paranormal entities. This 90-minute tour begins as a short walk near Baltimore Street and Steinwehr Avenue, eventually covering all of the ground that is relates to the orphanage.

Telling stories along the way, guests are schooled on the history leading up to the establishment of the National Homestead Orphanage. Before reaching the tour’s ultimate destination, tourists will pass historic buildings and locations like Dobbin House, Soldiers National Cemetery, as well as the former Hall of Presidents and First Ladies Museum.

Afterward, the tour takes its guests into the actual orphanage, allowing them to see what life was like for these poor kids who had to suffer the loneliness brought on by war. After seeing the grounds and main rooms, tourists will then walk down the steps that lead into the basement. There, they are told of what took place and how Rosa Carmichael used it to punish orphans.

Tours like these serve to keep legends alive, and Gettysburg National Tours has done a tremendous job in doing just that. It’s great to occasionally be reminded of our young nation’s history in order to better appreciate how we’ve come since those dark days. While tragedies naturally still happen every day, life now is nothing like it used to be, and this tour really helps to put that into perspective.

Tourists and employees alike will no doubt continue to experience otherworldly encounters with the ghosts of Gettysburg’s past. The results of the war that took place here will forever be remembered by such paranormal happenings.

And while it is a shame that the events of the American Civil War and Battle of Gettysburg had to happen, it is an important part of our young nation’s past, as it helped to shape who we are today as a country. It is crucial that these tales are continually passed on to each new generation of young thinkers.

If left forgotten, we run the risk of making some of the same mistakes that lead to the Civil War in the first place. And this is a dangerous proposition, as history has proven time and again that those who fail to learn from their mistakes are doomed to repeat them.