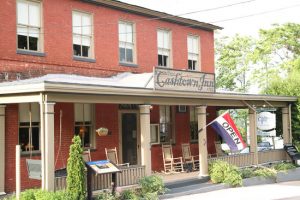 Gettysburg, Pennsylvania is known by many to be a hot spot for ghostly activity. Its part in the American Civil War by way of the Battle of Gettysburg is widely accepted as the most brutal and bloodiest of any infighting to ever take place on American soil. Hauntings at Cashtown Inn have their own story.

With a death toll reaching around 50,000 troops, it’s easy to see why such a large number of ghostly sightings take place here every year. Numerous homes and businesses claim to be inhabited by spirits; some friendly and some malevolent.

The Cashtown Inn is largely considered to be the most haunted location in all of Gettysburg. But how did it get this way? And how did a simple inn ever get a name like “Cashtown”? Read on to learn the answers to these questions and a whole lot more.

What’s in a Name?

Built in 1797, the Cashtown Inn’s first innkeeper was a gentleman by the name of Peter Marck. By 1815, Marck had acquired his tavern license and soon began offering room and board out of his quaint little inn.

Marck had a stiff policy of only accepting cash from his patrons and thus his inn soon became known as Cashtown. So popular was this name among locals and tourists that the town in which it resided would promptly follow suit.

Like many other businesses that were around during the American Civil War, the Cashtown Inn was taken over by Confederate officers and used as a General’s headquarters. Once the war hit Gettysburg, any and every establishment was fair game for Confederate forces to occupy and make their own.

During the Gettysburg Campaign in the summer of 1863, Confederate troops began marching the streets of Cashtown and the surrounding areas. Cashtown Inn’s new innkeeper, Jacob Mickley, witnessed the incoming military unit, saying, “The entire force under Lee passed within twenty feet of my barroom.”

Filling the roadways were the Confederate soldiers of Lieutenant General A.P. Hill, flying their red banners and armed with swords and bayonets. Soon, Mickley found himself and the inn crawling with Southern forces.

This marked the second time in less than a year that Cashtown would be invaded by Rebels. Just a few months prior in 1862, the Confederate cavalry had occupied Cashtown under the command of Major General James Stuart.

Nearing the end of June in 1863, Colonel Lee and his Confederate men had freely made their way well into southern Pennsylvania. Due to Union forces advancing to the north of the Potomac River, Lee advised his officers to assemble all of their troops and hold at Cashtown.

Cashtown was strategically located directly in Lee’s supply line to Virginia, which served to be advantageous for Confederate forces. Soon, quaint Cashtown was overran with legions of Rebels, and Mickley found himself serving many an unwanted guest.

As one of the oldest taverns in the area, Cashtown Inn prided itself on welcoming outside strangers and travelers since 1815. On this night, however, the inn was crawling with sorts with whom Mickley didn’t agree.

Of these invaders were Confederate Generals like A.P. Hill, John Imboden, and Henry Heth. At this juncture in their travels, General Hill was suffering from a chronic disease and needed a secure, clean place like the Cashtown Inn to rest his weary bones.

The inn had gained a reputation for having facilities for daily bathing, comfortable beds, and a peaceful neighborhood. From here, General Hill could better plan Union attacks while taking advantage of the luxuries that Cashtown had to offer.

Also helpful to the soldiers was the inn’s two large firebrick ovens down in its cellar. The Confederates would bake massive amounts of bread daily, providing a seemingly endless supply of food for their troops.

Almost overnight, Cashtown saw itself transformed into an army camp, with only a mere eight miles separating the inn from the war. Military activity was heavy because of this, and a simple errand caused the battle to come to Cashtown. General Hill had sent General Heth’s division to Gettysburg to get shoes and supplies.

But his men were attacked while en route, revealing where they were stationed. Colonel Lee had positioned hundreds of supply wagons, cannons, and carriages at Cashtown. Now, they were ripe for the picking. With injuries well into the hundreds, Lee quickly used any transportation he had to take his wounded men back to Virginia.

Not long after, General Imboden ordered all remaining soldiers and equipment out of Cashtown and to Virginia. Once the last of Imboden’s troops retreated, peace finally returned to Cashtown.

During the Confederate’s time at the inn, injuries and deaths reached into the thousands. Gunfire, fighting, surgeries, amputations, and everything in between permeated little Cashtown Inn.

While the upper portion of the inn was used for planning Union attacks, its basement was utilized to become a make-shift field hospital. Many wounded soldiers would enter to seek medical treatment, with some never returning to battle.

It is from the many amputations performed here that the Cashtown Inn gets its haunted lore. Severed limbs were said to be so abundant that they piled high enough to cover the basement’s windows, blocking even sunlight from entering.

The Most Haunted Inn of Gettysburg

In recent years, the Cashtown Inn has gained much attention from paranormal investigators and ghost-hunters. So much so, it was the subject of the season four Ghost Hunters episode “The Fear Cage.” The inn was even featured on the silver screen in the movie Gettysburg, starring Sam Elliott, who stayed at the inn during filming.

The current owner of Cashtown Inn has a collection of photographs that appear to be evidence of paranormal entities at play. These pictures show strange orbs of light and frightening skeletal figures.

Guests who have stayed at the inn often complain of loud banging on their doors at night, lights turning on and off without explanation, and even doors locking on their own.

In what is certainly the most bizarre of all ghostly encounters, there have been some guests who claim to have returned to their rooms to find that their luggage has been packed all on its own.

One couple reported hearing footsteps in their room along with incessant knocking at their door. Once the knocking stopped, footsteps walked right up to their bed and stopped at the foot of it. Suddenly, their mattress began to shake and compress as if a ghostly entity was pushing on it.

Freaking out, they couple laid perfectly still and watched in horror as the mattress began to ripple, similar to how water is affected by a pebble thrown into it. The woman then felt something grab her shoulder, but it was not her husband.

Ghostly apparitions are said to appear in greater numbers around the dates of July 1st, 2nd, and 3rd – the same dates as the Battle of Gettysburg.

In recent decades, Cashtown Inn sadly began to deteriorate after nearly 200 years of operation. Not helping matters, a major bypass was constructed that caused Cashtown to nearly be forgotten, as it was easily overlooked by tourists passing through.

Falling further into disrepair, the Cashtown Inn was even at one time considered for use as low-income apartments. Thankfully, former owners Charles and Carolyn Buckley restored the inn to its previous splendor, and a resurgence in paranormal investigating has put Cashtown back on the map.

Today, it still features its original four rooms, but also has three suites, each named after a Confederate General from the infamous Battle of Gettysburg.

Now a much-loved hot spot for those interested in all things otherworldly, the Cashtown Inn once again thrives with locals and tourists alike who hope to catch a glimpse of the many Confederate spirits said to inhabit the locale.