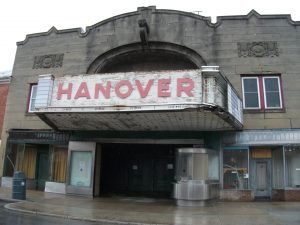 Just outside of Gettysburg, the small town of Hanover has a population of just over fifteen thousand. Known as the “Snack Food Capital of the World,’ Hanover has created a name for itself not only in manufacturing but also in spiritual hauntings emanating out of its long history. It once housed Thomas Jefferson on his way to draft the Declaration of Independence and saw a battle during the times of the Civil War. Founded in 1727, the three-hundred-year long history of Hanover has brought about some truly horrifying hauntings. Here’s the story of a truly chilling haunted Hanover home.

DeAnna Simpson, a woman who came forward in 2014 to tell of her story, spoke of several ghosts and other entities that are ‘severely haunting’ her home. Simpson says she and her husband have lived in the home for seven years, and that they have put everything they owned into buying it. She says they did not know of the hauntings until after they had already moved in. Simpson has collected photographs of ghosts caught on film, as well as pictures of guests who have been scratched or otherwise attacked when they enter the Simpson home. She has also gathered audio recordings of disembodied voices and children laughing in the haunted Hanover home – which were not heard at the time they were collected.

When asked how many entities haunt her home, DeAnna stated in an interview with Fox 43, “Five plus. I have some here that are protecting me, some women here that are protecting me, but the majority are bad, dark forces, inhuman.” She states that one of the entities in the home is a demon, and it appears in photos as a 7-foot-tall shadow figure. Even one of Fox 43’s reporters who entered the house was attacked on film, and DeAnna even used holy water on him to prevent the entities from attaching. Simpson has invited priests, who left the house in a hurry, paranormal researchers, and even the members of the Travel Channel TV show ‘The Dead Files’ have been inside, which turned up evidence of grisly deaths that occurred in the house.

DeAnna reports hearing strange whispering, footsteps in her hallways, even plagues of locusts descending upon her home while leaving all their neighbors’ homes alone.

After seven years of hauntings, DeAnna Simpson decided that she needed to get her story out into the world. She needed help, from anyone who was willing to give it. DeAnna ended up in contact with paranormal investigator Joni Mayhan, who has years of experience with negative hauntings and was prepared to deal with whatever was lurking inside of the Simpson home. Once Joni arrived, she realized that she had truly met her match. She explained that the house seemed as if it was pushing her back outside. Almost as if it didn’t want her telling its story. DeAnna had explained to Joni some of the happenings beforehand, warning her that what was there was real, and it was evil. DeAnna reported that over seven years, the hauntings got worse and worse over time, and she felt as though the entities were going to kill her one day.

DeAnna was drawn to her home from the very beginning, in an almost unnatural way. She felt as though the brick home was the house of her dreams, and she was meant to live there. She refused to even look at other homes, regardless of her husband Tom’s opinions of it. She felt elated for a few days, but the darkness of the haunted Hanover home started to come out.

It all started when she started to take pictures of the house to show her family her new home, orbs and apparitions began to appear in the photographs. She brushed this off as lens flare, but when she began to feel watched at nighttime while her husband was at work, her feelings changed. Even her cat was affected negatively by the home, coming into the new house as a happy and healthy feline, and within a few weeks needing to be put down due to sickness.

One instance that Joni was struck by was the story DeAnna told her of an old woman who came up to her while she was outside doing yard work. This elderly lady walked up with a three-legged dog, said “you know a boy died in that basement, don’t ya?’ DeAnna was surprised by the woman, turned to put her rake down, and when she turned back, the old woman had vanished. At this point, she attributed these paranormal events to just coincidences, not a haunting.

Things began to pick up when they began to smell rotting flesh, urine, and other bodily fluids all throughout the home, coming on quickly and disappearing. Any paranormal enthusiast will tell you that smelling rotting flesh in your home is extremely indicative of a demonic haunting. DeAnna then started seeing black mists floating throughout the home in corners and closets, and she even started googling symptoms of schizophrenia, thinking that she was going insane. Her husband did not believe her when she told him what was going on, since they had sunk all their savings into the home, he refused to believe that the home was inherently bad, he couldn’t accept that they had bought a truly haunted Hanover home.

The event that tipped the table was when her daughter Amber moved in from college. Amber started to have experiences as well. Amber noticed her bedroom seemed dark, unnaturally black. She heard footsteps outside her bedroom door, strange noises, one of which was the slamming of kitchen cabinets. When she got up to investigate, she was shocked when she found all the cabinets wide open. Once DeAnna had confirmation that it wasn’t her that was the issue, she accepted that her home was haunted.

One day Amber and DeAnna went to do laundry in the basement, and all the lights went out, they were left in the pitch black. Finally finding their way out, it turned out that the power had not gone out at all, but the light switch had actually been switched off. Shortly after this encounter, Amber moved out due to the hauntings, and DeAnna contacted a minister who served the church across the street. She asked for a simple house blessing, not telling the minister of the hauntings that were occurring in the home.

Finally, on the morning of the blessing, DeAnna saw the minister coming out of the church, not alone, but with six deacons following behind her, almost like an army to combat the spirits in the home. DeAnna wondered how the minister found out about how dangerous her home was. Once the minister found out DeAnna and Tom weren’t married at the time, she stormed out of the home, refusing to help ‘sinners.’ As she left, DeAnna smelled burning wood, and when she looked down, she saw a footprint burned into the floor where the minister stood. Did the entities in the home push this woman of God from the home, refusing to be extracted? Once this happened, DeAnna felt hopeless, who would help them now?

After speaking with a friend at work, DeAnna received the number of a paranormal investigation team to come in and try to contact the entities in the home. Unfortunately, this did not do much for relieving the hauntings. After the visit, the house became even more hostile.

Not long after the visit of the investigators, DeAnna was leaving the bathroom one night when she smelled a strong scent of blood. She looked down and saw the entire bathroom floor coated with blood. Fearing she was hemorrhaging, she called for her husband. By the time he came to her aid, the blood had disappeared. That night she and Tom started to hear footprints on the roof, as well as gunshots echoing in the home. One day she was pushed down so hard she fell to the floor.

It took several years before Tom had his own encounter, finally agreeing with DeAnna that the house was haunted. He had been sitting in the living room with DeAnna, when their new cats sat up abruptly and hissed, staring at the basement door. As they both looked up, they saw a black mist curling from under the basement door, up to the ceiling, and into the kitchen. Tom followed it, and it turned into a ‘slow-motion tornado with arms coming out of it.’ It then growled at the frightened couple and disappeared into the ceiling, which left a dark stain that they are unable to remove.

Today, the Hanover haunting continues. According to the home’s history, there have been multiple deaths on the property. DeAnna believes that the spirit of a murderer attached to her when she took a walk through a local cemetery, and now resides in her home. While many professional paranormal teams have entered this truly haunted Hanover home, the entities that plague DeAnna and her husband remain.

For another read regarding a haunted homestead in Pennsylvania, check out our article about the Jennie Wade house here!